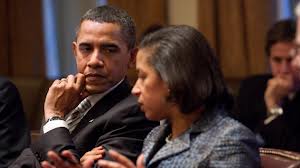 “While I deeply regret the unfair and misleading attacks on Susan Rice in recent weeks, her decision demonstrates the strength of her character, and an admirable commitment to rise above the politics of the moment to put our national interests first,” Mr. Obama said in a written statement released by the White House.

Mr. Rice, in a letter written to the president, said while she is “fully confident” she could serve the country ably, she is “now convinced that the confirmation process would be lengthy, disruptive and costly—to you and to our most pressing national and international priorities.” She added, “That trade-off is simply not worth it to our country.”

Ms. Rice had been seen as a front-runner for the job. But she came under pressure from Republicans for her Sept. 16 appearances on Sunday morning news shows discussing the Sept. 11 attack on the U.S. consulate in Benghazi, Libya, in which the U.S. Ambassador Christopher Stevens and three other Americans were killed.

She had been asked to represent the administration by the White House and had received talking points from the Central Intelligence Agency. While the agency’s initial reports from Benghazi concluded the attack was intentional and contained a reference to possible involvement by an al Qaeda affiliate and a local militant group, the talking points, developed after rounds of bureaucratic exchanges, dropped the reference to al Qaeda and instead called the attack the work of “extremists.”

Those talking points and Ms. Rice’s TV appearances are at the center of the argument over how the White House handled the intelligence coming from Libya, and whether the White House, with an eye on the November elections, played down evidence that the attack was an act of terrorism.

Ms. Rice’s withdrawal from consideration shifts the spotlight to Sen. John Kerry (D., Mass.). He is also considered a top pick for Secretary of State when Hillary Clinton leaves next year.

Ms. Rice will remain in her post as U.N. ambassador.