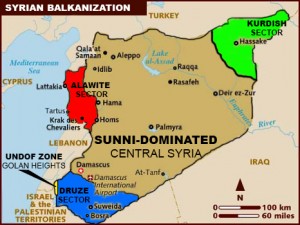 Up to 200 members of President Bashar al-Assad’s Alawite minority were injured or killed in an attack on their central Syrian village on Tuesday, activists said, while to the south rebels and state forces battled for the outskirts of Damascus.

With a broad grouping of governments opposed to Assad meeting in Morocco on Wednesday, an official in the Syrian Muslim Brotherhood criticized the United States for designating an Islamist rebel group as a terrorist organization, meaning it would get no American help in the fight against Assad.

Casualty counts varied for the attack on the village of Aqrab in Hama province, but several activists said they could confirm 10 dead. The Syrian Observatory for Human Rights said the casualties came during a series of explosions in the town.

Opposition activists posted videos on YouTube in which survivors said pro-Assad militias had used children as human shields in the village. However, the accounts could not be independently verified and the events remained unclear.

Syria’s upheaval, which began as a protest movement against Assad 20 months ago, has turned into a civil war which has now has killed more than 40,000 people. Majority Sunni Muslims have mostly led the revolt against Assad while minorities such as the Alawites, from an offshoot of Shi’ite Islam, have largely stood by the president.

Sectarian bloodshed has previously hit both Hama province, where Aqrab is located, and neighboring Homs province. Both witnessed massacres of hundreds of Sunni residents but Tuesday’s incident, if confirmed, would be the first known large-scale attack on Alawites.

The opposition-linked Syrian Observatory for Human Rights said 125 had been hurt or killed but said it was still trying to find out what happened. There were no reports on Syria’s state media.

An Alawite resident of a nearby village said the violence began in Aqrab when rebels attacked a checkpoint run by pro-Assad militiamen, known as shabbiha.

“We don’t believe there was a massacre but we think there are a number of hostages being held. Clashes began when rebels started shelling the shabbiha checkpoint,” he said by Skype. “But now the phone lines seem to be down in Aqrab so that’s all we know.”

The circumstances of the attacks are difficult to verify independently as Syrian authorities tightly restrict the activities of journalists.

A rebel who said he fought in Aqrab told Reuters that fighters had surrounded a house with more than 200 people because shabbiha were there. The militiamen had used women and children as human shields and the house had been shelled by Assad’s forces, he said, without explaining why they would attack their own side.

Wounded children, apparently Alawites from Aqrab, appeared at an opposition field hospital in the nearby town of al-Houla, where they were interviewed by rebels in videos published on YouTube. Three young boys gave a similar account as the rebel, but did not say whether they were hiding in the house fearing government shelling or rebel attack.

“We were inside the house with shabbiha, they said they were protecting us from the rebels. The rebels started telling us come out, no one will hurt you. The shabbiha wouldn’t let us leave,” said Mohamed Judl, a young boy covered in a blanket, shivering as he was interviewed by an activist at the clinic.

It was not clear whether the boy was speaking freely.

Rebels clashed on Tuesday with government forces near Damascus airport, battling for the capital’s outskirts in a conflict which the United Nations said has driven half a million people from the country since it began in March 2011.

Fighting near the airport, 20 km (12 miles) southeast of Damascus city centre, is part of a broader confrontation between the army and rebels who hold a near continuous arc of territory from the east to the southwest of Assad’s power base.

The growing military power of the rebels is matched by the increasing foreign support for Syria’s political opposition coalition, which expects to win broad recognition at the international meeting in Marrakech on Wednesday.

The centre of Damascus, shielded for months from the violence, echoed to the sound of shelling from Monday evening, residents said. “There were very heavy clashes since yesterday in the town of Haran, on the eastern side of the airport,” said rebel spokesman Mussab Abu Qitada by Skype from Damascus.

The rebels have seized several military bases across the country in the last month and are trying to encircle the capital, where power cuts and food shortages are hurting residents bracing for winter.

Assad’s political and armed opponents, dogged by splits and rivalries throughout their battle to end his family’s 42-year rule, have established a more unified political opposition and military command, hoping to win international recognition and stronger support on the battlefield.

“All indications on the ground signal the end of the regime of Bashar al-Assad,” leading opposition figure Riad Seif said on the eve of the Marrakech talks. “We expect this meeting to fully recognize the coalition as the sole representative of the Syrian people,” he told Reuters.

France, Britain, Turkey and the Gulf states have already granted the formal recognition. The European Union, in a meeting on Monday, moved a step closer towards recognition and the United States has suggested it could also endorse the coalition.

“We are telling the international community that we don’t want their military intervention but we want them to supply us with a developed anti-aircraft defense systems,” Seif added. “The Syrian people can finish off the battle within weeks if we get this support.”

But little in the way of direct military or financial support is expected to be channeled to the coalition at the Morocco meeting, partly because it lacks the ability to act as a provisional government and because Western powers are still wary of backing Islamist fighters in the rebel ranks.

Washington announced it had designated the radical Islamist rebel group Jabhat al-Nusra, which has claimed responsibility for dozens of car bombs and also fights alongside other rebel Syrian brigades, as a terrorist organization.

Designating it a terrorist group means Americans are prohibited from giving Jabhat al-Nusra any support.

A high-level official in the Syrian Muslim Brotherhood criticized Washington. “The designation is very wrong and too hasty. I think it is too early to categorize people inside Syria this way, considering the chaos and the grey atmosphere in the country,” Farouk Tayfour, deputy leader of the group, told Reuters.

A diplomat attending the meeting said there had been much “jockeying for position within the coalition without addressing the main political issues” including making arrangements to work with the Alawite, Kurdish and Christian minorities and creating a framework for transitional justice.

The fighting has driven hundreds of thousands of Syrians into neighboring countries and the United Nations refugee agency UNHCR said on Tuesday more than half a million were either registered or awaiting registration in the region.