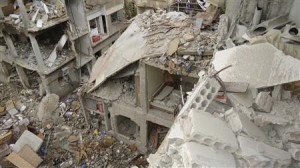 Western and Arab nations sympathetic to Syria’s uprising against President Bashar al-Assad gave full political recognition on Wednesday to the opposition, reflecting a hardening consensus that the 20-month-old uprising might be nearing a tipping point.

Meeting in the Moroccan city of Marrakech as rebels battled Assad’s troops on the outskirts of his Damascus power base, the “Friends of Syria” group called on Assad to step aside and warned him against using chemical weapons.

At the same meeting, the leader of Syria’s opposition coalition called on the Alawite minority to launch a campaign of civil disobedience against Assad, an Alawite who faces a mainly Sunni Muslim uprising against his rule.

“Participants acknowledge the National Coalition as the legitimate representative of the Syrian people and the umbrella organization under which the Syrian opposition are gathering,” said a draft declaration of the Marrakech meeting obtained by Reuters.

The gathering brings together many Western and Arab nations opposed to Assad, whose family has ruled Syria for 42 years. But it excludes Russia, China and Iran, which have backed Assad or blocked efforts to tighten international pressure on him.

“Bashar al-Assad has lost legitimacy and should stand aside to allow a sustainable political transition,” said the text.

Referring to Western intelligence reports suggesting Assad might use chemical and biological weapons, it said “any use of chemical weapons in Syria would be abhorrent and that this would draw a serious response from the international community”.

Participants announced the creation of a relief fund “to support the Syrian people”, calling on states and organizations to make contributions to the fund.

British Foreign Secretary William Hague, attending the talks, said: ” … in the United Kingdom we do not rule out any option to save lives. The Assad regime should not doubt our resolve, or miscalculate how we would react to any use of chemical or biological weapons against the Syrian people.”

The draft text called on the U.N. Security Council, which has been paralyzed by the major powers’ disagreements over Syria, to come up with “a meaningful and robust response” to the crisis and urged countries that support Assad to “reconsider their positions”.

NO PLEDGE OF ARMS

Although the text made no explicit commitment to arm the rebels, a diplomat following the talks said participants agreed on “the legitimate need of the Syrian people to defend itself against the violent and brutal regime of Bashar al-Assad”.

Another diplomat said Western powers did not rule out supplying arms to rebel units in the future, but would want assurances about where the weapons would flow – pointing to several atrocities committed by rebel fighters and the presence of radical Islamists in their ranks.

“No option is ruled out. But there are big issues about the legality of intervening in a civil war. Any support to any group depends on the command control and the discipline on the ground,” a Western diplomat at the Marrakech meeting said.

France said at the talks it was not ready to supply arms.

“For now we have decided not to move on this,” French Foreign Minister Laurent Fabius told reporters in Morocco. “We shall see in the coming months.”

Western officials are due to meet commanders of a newly formed rebel military command inTurkey next week.

Fighting is moving closer to Assad’s residence in the centre of Damascus, and early on Wednesday government forces fired artillery and rockets at southwestern suburbs of the capital adjacent to the Mezzeh military airport, activists said.

SANA said on Wednesday that “terrorists” detonated two bombs in the Damascus district of Jaramana, killing one person and wounded five, and another two bombs behind the Justice Ministry in Damascus, wounding one person.

In central Syria an attack on a village killed or injured as many as 200 members of Assad’s Alawite minority sect, activists said, but it was unclear who was behind the assault.

The mainly Sunni Muslim rebels have scored a string of victories against Assad’s forces, many of them from his Alawite religious minority. There is little evidence that the government is regaining control, residents say.

“We send a direct message to the Alawite brethren. The Syria revolution is extending its hand to you, so extend your hand back and start civil disobedience against the regime because it repressed you like it repressed us,” said opposition leader Mouaz Alkhatib.

Alkhatib, elected last month as leader of the National Coalition for Opposition Forces and the Syrian Revolution, urged Assad’s allies Iran and Hezbollah to withdraw their support.

The Syrian army is using warplanes and heavy artillery to try to halt further advances by rebels, many of them die-hard Islamists. Opposition leaders say they need heavy weapons to sustain the momentum and change the military equation in a conflict that has killed 40,000 people since March 2011.

The fighting has driven hundreds of thousands of Syrians into neighboring countries, and the United Nations High Commission for Refugees said more than half a million were either registered or awaiting registration in the region.

The rebels now hold a near continuous arc of territory from the east to the southwest of the capital. With conditions deteriorating, Damascus residents now face power cuts and food shortages as they prepare for winter.

Assad’s political and armed opponents, dogged by splits and rivalries throughout their battle to end his rule, have established a more unified political opposition and military command, hoping to win international support.

Qatar and Saudi Arabia are already arming and financing the Syrian Muslim Brotherhood and other militant groups, while Iran is bankrolling Assad.

“What is happening on the battlefield is very significant,” he told Reuters. “The decline of the regime has started.”

“The rebels are now much closer to the palace. Bashar is under siege. His end will be like Gaddafi’s end. Didn’t Bashar say, ‘I was born in Syria and will die in Syria’? This is what Gaddafi said as well, and that’s it.”

Opposition coalition member Abdelbasset Sida said diplomatic recognition in Marrakech would not be enough. “We need military support. A transitional phase has started, and we need the means to defend the liberated parts of Syria from regime strikes.”