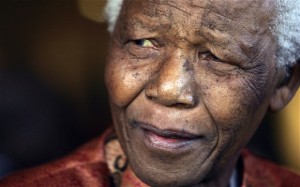 South African leaders issued assurances about the health of former president Nelson Mandela on Sunday night after the 94 year-old was airlifted to hospital having reportedly stopped speaking amid a deterioration in his condition.

The Sunday Times, a South African newspaper, quoted an unnamed person close to the Mandela family as saying: “He has not been talking … he is not looking good. It’s clear that something is troubling him.”

Mr Mandela, the country’s first black president, spent a second day at the Pretoria hospital where he is said to be undergoing tests. On Saturday he was flown from his rural home in the Eastern Cape to the capital Pretoria to receive medical attention.

President Jacob Zuma visited Mr Mandela, whose health has been frail in recent years, and “found him comfortable, and in good care,” a statement said.

No details have been released about the specific reason for Mr Mandela’s admission to hospital, or when he will be discharged.

Mac Maharaj, a spokesman for Mr Zuma, on Saturday said the anti-apartheid icon was “doing well”.

Mr Mandela, affectionately known in South Africa as “Madiba,” his Xhosa clan name, “will receive medical attention from time to time which is consistent with his age,” a statement on Saturday said.

Former wife Winnie Madikizela-Mandela and daughter Zindzi seemed to not view it as an emergency, or else were unaware that Mr Mandela had been transferred to Pretoria. They attended a football match in Soweto between the Orlando Pirates and Kaizer Chiefs on Saturday, local media reported.

The Congress of South African Trade Unions, allied with the ruling African National Congress party, responded in a statement: “We hope that it is true – as reported by the presidential spokesperson – there is no cause for concern or alarm.”

Deputy president Kgalema Motlanthe had been scheduled to visit Mr Mandela in Qunu on Friday, but the meeting was cancelled.

A South African military plane crashed Wednesday after disappearing en route from a Pretoria air base to Mthatha, the nearest airport to Mr Mandela’s home in Qunu village.

There have been persistent rumours that the aircraft was carrying medical personnel or medical supplies for Mr Mandela.

Mr Mandela was last hospitalised in February for what was described as “routine tests,” and later turned out to have been a minor surgical procedure to determine the cause of abdominal pain.

His last public appearance was at the final match of the 2010 FIFA World Cup, which South Africa hosted, where he toured the stadium on a golf cart with third wife Graca Machel.