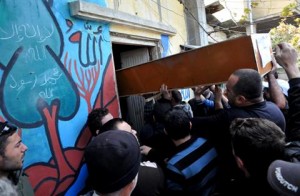 Lebanese authorities received on Sunday the first three bodies from a group of 14 Lebanese and Palestinian gunmen killed in Syria, local clerics said, as fighting triggered by the men’s death continued to shake the northern port town of Tripoli.

A Reuters reporter in the area said clashes with machineguns and rocket-propelled grenades killed at least two people on Sunday, raising the total to over 14 dead in a week, and more than 140 wounded.

Tensions in northern Lebanon have run high since at least 14 Sunni Muslim Lebanese and Palestinian gunmen from the area were killed by Syrian security forces a week ago in a Syrian border town. The men appeared to have joined the armed insurgency against Syrian President Bashar al-Assad.

Militants from northern Lebanon had long been suspected of entering neighboring Syria, but the killing of the gunmen sparked tensions Tripoli’s long simmering tensions.

Syria’s conflict has not only stirred sectarian fighting in its own population, it has also revived sectarian clashes in Tripoli, whose communal makeup reflects that of Syria. Majority Sunnis in the city support Syria’s mostly Sunni-led uprising, while Alawites, the Shi’ite-linked minority sect to which Assad belongs, are generally supportive of the Syrian president.

Syrian state television aired graphic video of the dead Lebanese gunmen, their bloodied corpses riddled with bullet holes. Families of the dead demonstrated last week to demand the return of the bodies, as clashes resumed in Tripoli.

An agreement was eventually reached between Syrian and Lebanese officials to transfer the bodies gradually, with the first three being delivered on Sunday. Cars brought the bodies up to the northern Lebanese border, where security forces and local religious authorities came to receive them.