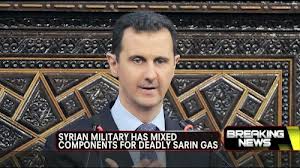 NBC News and Fox News reported Wednesday that a U.S. official claimed Syria’s military has loaded chemical weapons into aerial bombs and is awaiting authorization for their use from embattled President Bashar Assad.

The military has loaded the precursor chemicals for sarin, a deadly nerve gas, into aerial bombs that could be dropped onto the Syrian people from dozens of fighter-bombers, the officials said. As recently as Tuesday, officials had said there was as yet no evidence that the process of mixing the “precursor” chemicals had begun. But Wednesday, they said their worst fears had been confirmed: The nerve agents were locked and loaded inside the bombs. […]

Originally developed in Germany as a pesticide in 1938, according to GlobalPost, Sarin gas is a nerve agent, meaning it attacks the nervous system of the human body. The Germans quickly realized the gas’ usefulness for warfare upon its development, but chose not to use the deadly weapon against allied forces during WWII.

Sarin is a clear, colorless and tasteless liquid, the Center for Disease Control (CDC) explains, and as a gas it cannot be detected by smell. Exposure to Sarin can come through skin contact, eye contact, through breathing in air that contains Sarin or by drinking water mixed with the agent.

The deadly chemical was banned under the United Nations Chemical Weapons Convention of 1993, according to UPI.

The Council on Foreign Relations explains how Sarin disrupts the nervous system and overstimulates muscles and organs:

In high doses, sarin suffocates its victims by paralyzing the muscles around their lungs. One hundred milligrams of sarin (about one drop) can kill the average person in a few minutes if he or she’s not given an antidote. Experts say sarin is more than 500 times as toxic as cyanide.

Former Iraq dictator Saddam Hussein used a combination of chemical gasses, including Sarin, in his campaign against the Kurds in 1987 to 1988. The worst assault took place in the village of Halabja in 1988 and killed between 3,200 and 5,000 people, according to the BBC.

Sarin was also used in terrorist attacks on the Tokyo subway in 1995, when members of the doomsday cult Aum Shinrikyo left punctured packages of low-lethal sarin in the underground. In addition, the group had used previously used Sarin during an attack in the central Japanese city of Matsumoto, CFR details.