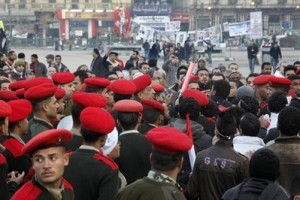 Egyptian riot police beefed up security around the presidential palace Tuesday ahead of a massive rally planned by activists protesting the Islamist leader’s assumption of nearly unrestricted powers and a draft constitution hurriedly adopted by his allies.

The march comes amid rising anger over the draft charter and decrees issued by Mohammed Morsi giving himself sweeping powers. Morsi called for a nationwide referendum on the draft constitution on Dec. 15.

It is Egypt’s worst political crisis since the ouster nearly two years ago of authoritarian president Hosni Mubarak. The country has been divided into two camps: Morsi and his fundamentalist Muslim Brotherhood, as well as ultraconservative Salafi Islamists versus youth groups, liberal parties and large sectors of the public.

Hundreds of black-clad riot police deployed around the Itihadiya palace in Cairo’s district of Heliopolis. Barbed wire was also placed outside the complex, and side roads leading to it were blocked to traffic. Protesters planned to gather at several points not far from the palace and march to the presidential complex from there.

A large turnout would signal sustained momentum for the opposition, which brought out at least 200,000 protesters to Cairo’s Tahrir Square a week ago and a comparable number on Friday, demanding that Morsi’s decrees be rescinded. Hundreds of protesters also have camped out in Tahrir for close to two weeks.

The Islamists responded by sending hundreds of thousands of supporters into Cairo’s twin city of Giza on Saturday and across much of the country. Thousands also imposed a siege on Egypt’s highest court, the Supreme Constitutional Court.

The court had been widely expected Sunday to declare the constitutional assembly that passed the draft charter on Friday to be illegitimate and to disband parliament’s upper house, the Shura Council. Instead, the judges went on strike after they found their building under siege by protesters.

The strikes were part of a planned campaign of civil disobedience that could bring in other industries.

Already Tuesday, at least eight influential dailies, a mix of opposition party mouthpieces and independent publications, suspended publication for a day to protest against what many journalists see as the restrictions on freedom of expression in the draft constitution.

The country’s privately owned TV networks planned their own protest Wednesday, when they will blacken their screens all day.

Morsi’s Nov. 22 decrees placed him above oversight of any kind, including the courts. The constitutional panel then rushed through a draft constitution without the participation of representatives of liberals and Christians. Only four women, all Islamists, attended the marathon, all-night session.

The charter has been criticized for not protecting the rights of women and minority groups, and many journalists see it as restricting freedom of expression. Critics also say it empowers Islamic religious clerics by giving them a say over legislation, while some articles were seen as tailored to get rid of Islamists’ enemies.