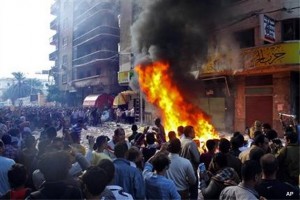 Leading democracy advocate Mohammed ElBaradei says dialogue with Egypt’s Islamist president is not possible until he rescinds his decrees giving himself near absolute powers.

Speaking to a handful of journalists, including The Associated Press, ElBaradei says he is hoping for a “smooth transition without plunging the country into a cycle of violence.”

But he says that may not be possible unless President Mohammed Morsi rescinds the decrees.

ElBaradei, a Nobel Peace laureate for his past work as the head of the U.N. nuclear watchdog, has formed a “National Salvation Front” with other liberal and secular leaders, trying to unify the opposition against Morsi.

In the decrees issued this week, Morsi put himself above judicial scrunity.

Egypt’s highest body of judges slammed on Saturday a recent decision by the president to grant himself near-absolute power, calling the move an “unprecedented assault” on the judiciary.

The statement from the Supreme Judicial Council came as hundreds protested outside a downtown courthouse against Thursday’s declaration by President Mohammed Morsi. The president’s decision means that courts cannot overrule his decrees until a new constitution and parliament is in place, several months if not more in the future.

The judges’ condemnation of the president’s edicts are the latest blow to Morsi, whose decision set off a firestorm of controversy and prompted tens of thousands of people to take to the streets in nationwide protests on Friday.

Through their statement, carried by the official MENA agency, the judges join a widening list of leaders and activists from Egypt’s political factions, including some Islamists, who have denounced the decree.

The Supreme Judicial Council is packed with judges appointed by former President Hosni Mubarak. It regulates judicial promotions and is chaired by the head of the Court of Cassation.

Their move reflects a broader sense of anger within the judiciary against the president. Some judges’ groups and prosecutors have already announced partial strikes to protest Morsi’s decree.

Morsi has accused pro-Mubarak elements in the judiciary of blocking political progress. In the last year, courts have dissolved the lower house of parliament as well as the first panel drafting the constitution, both led by his Muslim Brotherhood group.

The edicts Morsi issued mean that no judicial body can dissolve the upper house of parliament or the current assembly writing the new constitution, which are also both led by the Brotherhood. Supporters of Morsi feared that courts reviewing cases against these bodies might have dissolved them, further postponing Egypt’s transition under the aegis of a new constitution.

They say Morsi has a mandate to guide this process as Egypt’s first freely elected president, having defeated one of Mubarak’s former prime ministers this summer in a closely contested election.

The judges’ council’s stand against the president sets the ground for an uneasy alliance between former regime officials and activist groups that helped topple Mubarak’s regime and have in the past derided those officials as “felool,” or remnants.