Ahmad Mouaz al-Khatib, head of the Syrian National Coalition for Opposition and Revolutionary Forces, made the announcement on Monday after a meeting with Mohamed Amr, Egypt’s foreign minister, in Cairo, according to the report.

“There is a decision by the coalition to make Egypt its main headquarters,” MENA quoted Khatib as saying.

The Egyptian foreign ministry said in a statement that the country was ready “to offer all means of assistance to the Syrian coalition in the coming period”.

The developments came as a new video emerged purporting to show opposition fighters from at least 14 “battalions” announcing their rejection of the Syrian National Coalition.

A fighter can be seen reading out a statement indicating that the groups, which include the powerful Liwaa al-Tawhid and the Jubhat a-Nusra, support an Islamic state in Syria.

“We, the groups in the city of Aleppo and its suburbs, completely reject the conspiratory project which was named the National Coalition,” the fighter says.

The video was posted on the web on Monday.

“We agreed on establishing an Islamic state in Syria and rejecting foreign projects, including coalitions and councils imposed on us inside [the country],” the fighter says.

The authenticity of the video could not be independently verified. 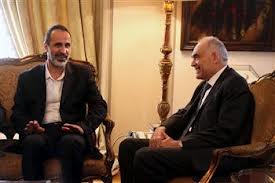 A spokesperson for Liwaa al-Tawhid told Al Jazeera that the video, despite being published on the group’s Facebook page, was not representative of the leadership’s position.

“This video was done by members of the group without referring back to the leadership. The leadership will issue a statement soon,” he said.

Ahrar al-Sham, a group whose name was among the signatories of the statement, said they had nothing to do with it.

Its co-ordinator told Al Jazeera that the statement “seems to to be the work of commanders from different groups who may not necessary represent the groups’ views”.

The statement, if true, highlights the challenges facing the Syrian National Coalition, formed in Doha, Qatar, on November 11.

The umbrella body has said it aims to strengthen it links with rebel fighters and unite them in their fight against President Bashar al-Assad.

Liwaa al-Tawhid, a brigade formed in July, is said to have at least 10,000 fighters. it is credited for the opposition’s control of vast areas in Aleppo province.

The other group, Jabhat al-Nusra, a self-proclaimed jihadist group operating in Syria, has claimed responsibility for several bombings in the capital, Damascus.

The online statement has already been denounced by several opposition activists.

“Whether this statement is true or not, the Syrian people are all supportive of the coalition,” Mohammad Saeed, an Aleppo-based activist of the Syrian Revolution General Commission activist network, said.

“We took to the street in mass protests on Friday and rallied under the banner ‘supporting the Syrian National Coalition.

“These groups have no right to support or reject the coalition.”

Syria’s opposition had come under pressure from Western powers to join forces and offer a single interlocutor during negotiations, in order to provide a single contact for international critics of the regime’s military crackdown.

The new coalition brings together the existing Syrian National Council and other opposition groups inside Syria.

Italy said on Monday it was recognising the new Syrian opposition council, but stopped short of conferring diplomatic recognition on it.

France announced jointly with Syria’s opposition plans to install a Syrian ambassador in Paris, after it formally recognised the National Coalition as the representative of the Syrian people,.

The US said the National Coalition was “a legitimate representative” of the Syrian people, but stopped short of recognising it as the sole representative, while the UK said it needed more details before making a decision.

The Arab League has recognised the bloc as “the legitimate representative of the Syrian people’s aspirations”, with Nabil Elaraby, the secretary-general, describing it as “a glimmer of hope”.

Suhair al-Atassi, the National Coalition’s vice-president, has told Al Jazeera that the new body wanted to unite all the opposition brigades on the ground.

“The bloc will have an executive body inside made up of local committees and military councils,” she said.

“We will urge the international community to channel both humanitarian aid and military aid through this body. This will dry out or at least dwindle the informal funding,” Atassi says.

She said the international community should be serious about supporting the National Coalition with sufficient funds and by arming Syrian rebels.