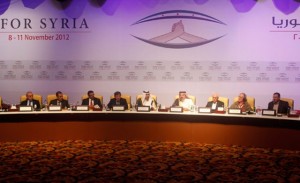 The Arab League on Monday recognized a newly formed Syrian opposition bloc as “legitimate,” urging more opposition groups to join the coalition, but Lebanon dissociated itself from the AL action.

Arab foreign ministers gathered in Cairo in a statement after talks called the National Council, formed in Doha on Sunday, “the legitimate representative and main interlocutor with the Arab League.”

They called on “the rest of the opposition to join this national coalition so that it brings together all segments of the Syrian people.”

The Gulf Cooperation Council (GCC) said Monday its six member states have decided to recognize the newly formed National Coalition of the Syrian opposition as the legitimate representative of the Syrian people.

“The states of the council announce recognizing the National Coalition for the Forces of the Syrian Revolution and Opposition… as the legitimate representative of the brotherly Syrian people,” GCC chief Abdullatif al-Zayani said in a statement.

The statement said the GCC was “looking forward to Arab states and the international community recognizing the coalition.”

Zayani said the nations of the oil-rich bloc would support the new body which was formed on Sunday after marathon talks in Doha to unite the opposition against the regime of President Bashar al-Assad.

“Council states will provide support to this new entity, in order to achieve the aspirations of the Syrian people, in hope that this (coalition) will be a step towards a quick political transfer of power,” Zayani said.

The GCC secretary general also said he hoped that the formation of the new coalition “would lead to ending the bloodshed, protect the territorial unity of Syria, and to hold a general national congress to pave the way to build a state ruled by law and open to all its citizens without exceptions or discrimination.”

The deal to form a broad-based opposition to take the uprising forward drew a warm welcome from Western governments that had expressed frustration with the leadership divisions that have plagued the revolt against Assad’s regime.

“We look forward to supporting the National Coalition as it charts a course toward the end of Assad’s bloody rule and the start of the peaceful, just, democratic future that all the people of Syria deserve,” State Department deputy spokesman Mark Toner said in a statement.

The head of Lebanon’s Shiite group Hezbollah, a key ally of Syria’s President Assad, on Monday denounced a newly formed Syrian opposition bloc as a U.S. invention whose refusal to negotiate would only lead to more destruction.

“They (the Syrian opposition) met in Doha, locked themselves in a hotel to form a new group and did what (U.S. Secretary of State Hillary) Clinton and America wanted,” Hassan Nasrallah told a Beirut ceremony, speaking by video link.

“But the most dangerous aspect is that the opposition parties decided unanimously in Doha to reject dialogue and a political solution,” Nasrallah said, his speech relayed on a giant screen.

“That is to say, they have chosen the path of destruction. And who will profit from this? Clinton, the United States, Israel and certain regional parties.”

He again called on the Syrian opposition to engage in dialogue with Assad, an appeal already rejected outright by the dissidents who say any talks are conditional on Assad’s departure.

Meanwhile, fighting flared on Syria’s border with Turkey on Monday, while Israel fired across the ceasefire line on the Golan for a second day, stoking fears of a spillover of the 20-month conflict.

At least 52 people were killed across Syria on Monday, including 24 civilians, said the Observatory for Human Rights, which has given an overall death toll of more than 37,000 since the revolt broke out in March 2011.

During a press conference after the Arab League recognized the newly formed Syrian opposition bloc Lebanon FM Adnan Mansour, a key ally of Hezbollah and Syria said ” right from the beginning Lebanon adopted the policy of dissociation with regards to the uprising in Syria and for this reason we will also dissociate Lebanon from this recognition. We repeat our call for dialogue between the Syrian regime and the opposition ”