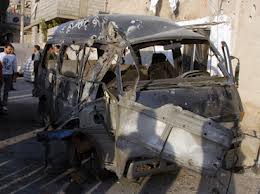 Syrian rebels fired mortars at President Bashar al-Assad’s palace in Damascus on Wednesday but missed, in an attack underlining the growing boldness of forces fighting to end his family’s 42 years in power.

As violence flared in other parts of the country, Turkey said it was about to ask NATO to station Patriot missiles along its border with Syria to guard against violence spilling onto its territory.

Syria’s war, which has already destabilized neighboring Lebanon and raised the specter of wider Middle East turbulence, poses one of the greatest foreign policy challenges for U.S. President Barack Obama as he starts his second term.

Damascus residents told Reuters heavy-caliber shells apparently aimed at the palace hit the nearby residential Mezze 86 district that is home to members of Assad’s Alawite sect. State-run media said at least three people were killed and seven wounded in what it described as a terrorist attack.

“Ambulances are heading to the area and the shabbiha (pro-Assad militiamen) are firing automatic rifles madly in the air,” said a housewife who asked not to be named.

Rebels have focused efforts on high-profile attacks against symbols of Assad’s rule, such a his palace. A July bomb that killed four of Assad’s top lieutenants was shortly followed by a rebel advance into Damascus.

Fighters in the mainly Sunni Muslim opposition have stepped up attacks in the capital this week, setting off bombs in at least two areas populated by Alawites and assassinating two figures seen as close to the Assad administration.

The violence has highlighted the sectarian dimension of a civil war that is deepening the rift between Sunni and Shi’ite Muslims in the region – Assad’s Alawite sect is an offshoot of Shi’ite Islam.

An Islamist rebel unit said it targeted but missed the palace, a compound mainly used for official functions which sits on a hill overlooking the city. It was not possible to verify whether Assad was staying there at the time. He has several residences across the city.

“This operation came in response to the massacres committed in our beloved city,” the Lions of Islam rebel group said in a statement. They said they also attacked a military airport and an intelligence facility in the capital, but there was no independent confirmation of those reports.

International and regional rivalries have complicated efforts to mediate any resolution to the conflict – Russia and China have vetoed three U.N. Security Council resolutions that would have put Assad under pressure.

The conflict has also started to drag in neighboring countries. Turkey has been responding in kind to mortar bombs hitting its territory from fighting between Syrian rebels and Syrian government forces.

A senior Turkish foreign ministry official told Reuters on Wednesday the government would make an “imminent” request to protect its 910-km (560-mile) border with Patriot missiles.

The official said there was a potential missile threat to Turkey from Syria and Turkey had a right to take steps to counter such a threat. He gave no further details.

The United States and other Western powers say a resolution to the conflict has also been frustrated by divisions and in-fighting between Syrian opposition groups.

In a new push for unity, the main Syrian overseas opposition group the Syrian National Council (SNC) is meeting in Qatar on Wednesday to elect a leader and executive committee.

The SNC and other groups will then meet on Thursday to form a new 50-member civilian group that will later choose a temporary government for Syria and coordinate with the revolt’s military wing.

Highlighting how Palestinian refugees have been drawn into the conflict, rebels killed 10 members of the Popular Front for the Liberation of Palestine-General Command (PFLP-GC), which is loyal to Assad, in fighting near the Palestinian camp of Yarmouk in Damascus, opposition sources said.

Syrian rebels and pro-opposition Palestinians announced the formation of a new brigade last week to battle the PFLP-GC.

A car bomb blast killed at least 11 people in Mezze 86 district on Monday. Islamists, who are taking on an ever more prominent role in the war, also claimed responsibility.

In what appeared to be a tit-for-tat response to those attacks, a car bomb went off on Tuesday in a working class Sunni area of the city that is a base for the rebel forces.

Air strikes and artillery barrages unleashed by the Syrian military in the last few weeks have wrecked whole districts of the capital, as well as parts of towns and cities elsewhere.

Yet, for all their firepower, Assad’s forces seem no closer to crushing their lightly armed opponents, who in turn have so far proved unable to topple the Syrian leader.

The Syrian Network for Human Rights, an opposition monitoring group, said Assad’s forces killed 154 people across Syria on Tuesday, mostly civilians in aerial and ground bombardment on Damascus and its suburbs, and the northern provinces of Aleppo and Idlib.

British Prime Minister David Cameron visited a Syrian refugee camp in Jordan on Wednesday and said that efforts so far to halt the bloodshed had been fruitless.

“I am standing with the Syrian border just behind me and every night 500 refugees are fleeing the most appalling persecution and bloodshed to come to safety and frankly what we have done so far is not working,” he said.

Cameron, who said on Tuesday that offering Assad immunity from prosecution could be a way of persuading him to leave power, said the president would have to face justice.

“I would like to see President Assad face full international justice for the appalling crimes he has meted out on his people,” he said on a visit to Zaatari, a camp housing about 30,000 Syrian refugees in northern Jordan.