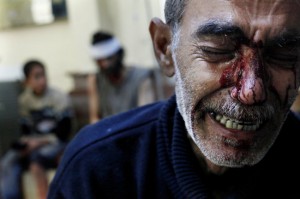 BEIRUT, Lebanon — China unveiled a vague four-point peace plan for Syria on Thursday that called for a cease-fire in stages and a political transition to end the conflict.

The plan lacked crucial specific details, however, like what role President Bashar al-Assad of Syria would play in any transition. China has been one of his main international backers since the uprising started in March 2011.

But the fact that China’s announcement came one day after the United States made it clear that the Syrian opposition needed new leadership underscored a subtle shift in international attitudes toward resolving the conflict.

The Syrian government and the opposition have battled to a bloody stalemate after 20 months, at a cost of more than 30,000 lives, and there is a sense that fresh diplomatic opportunities might change the dynamic.

“There has been a generalized shift toward a recognition that developments on the ground have created space for new leaders, new organizational frameworks and new governance to emerge,” said Steven Heydemann of the United States Institute of Peace, who is working with the opposition on possible transition plans.

Although the opposition has yet to gain lasting control over any significant city, Mr. Heydemann said that certain areas had fallen outside government control to the point that local leaders and councils had emerged as alternatives with which to carry on negotiations.

The most recent attempt at a cease-fire during the four days of the Id al-Fitr holiday last weekend, which was negotiated by the international envoy, Lakhdar Brahimi, failed, and each side still believes it can fight its way to victory.

But there have been subtle hints that alternate possibilities are not being rejected out of hand.

In Syria, for example, a columnist in the state-controlled newspaper Al Thawra suggested on Wednesday that room exists for further efforts, while reiterating the government position that outside plots led to the cease-fire’s failure. It praised the Russian foreign minister, Sergey V. Lavrov, for saying at a recent news conference that he would speak to all political parties involved.

“That is the first necessary step for anyone really and earnestly seeking a political solution,” the columnist, Assad Abboud, wrote. “Sanctions, boycotts, and laying siege to one party in an attempt to strengthen another leave no objective chance for political action that seeks a solution.”

There is also public opinion to take into account. Activists note that the Syrian public is exhausted by the conflict, and increasingly annoyed by fighters on both sides.

“People inside want any solution; they want security,” said Rami, a young activist in Beirut who would be identified only by one name out of concern for his safety. “No one can stand the pressure anymore.”

“If we want to be honest, we’re waiting for a truce, we want to negotiate for him to leave,” he added, referring to President Assad.

But Mr. Brahimi, the envoy, has insisted that for negotiations on a political solution to move forward, he needs the backing of a unified Security Council. The Chinese proposal seemed intended to address that condition.

The Chinese Foreign Ministry proposal began with an expression of support for Mr. Brahimi. It called for humanitarian aid for refugees from the conflict without regard for political or military demands.

A cease-fire should be carried out “by district and in stages,” the proposal said without elaborating, with the final goal an end to all fighting. Government institutions, it said, should continue to function, while the parties to the conflict identify members of negotiating bodies to participate in the transition process.

“For China to bring up this proposal now is to bring the global community together, cooperate with Brahimi’s mediation efforts and push on the political resolution process and realize the cease-fire as soon as possible,” Hong Lei, the spokesman for the Foreign Ministry, told reporters.

But diplomats who had seen the proposal said it left out as much as it contained. It did not address the utter failure of the last cease-fire, for example, nor suggest any kind of timetable.

All five permanent members of the Security Council signed off on an agreement in Geneva last June that they would try to achieve a peaceful political transition in Syria. Mr. Brahimi is trying to add specifics to the bare bones of that plan.

He, too, is not working under any specific timetable. Having just visited Moscow and Beijing, he denied reports that he would present the Security Council with a more specific plan in the coming weeks.

Photo: The father of an 8-year-old girl killed Wednesday by fire from government forces on a rebel-controlled area of Aleppo, Syria.