Lebanon’s Sunnis at risk of radicalization 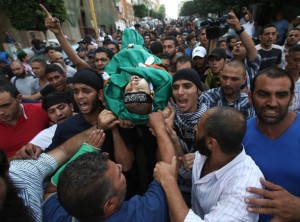 Beirut , Lebanon – In the cramped, working-class neighborhood of Tariq al-Jdeideh, Beirut’s last pocket of Sunni control, the walls tell the story of a community in the throes of a potentially profound transformation.

Faded portraits of the mainstream Sunni leader Saad Hariri, left over from the last crisis that engulfed Lebanon, are gradually being eclipsed by a newer symbol, the black flag inscribed with the Islamic creed that is often linked to the global al-Qaeda franchise.

The young Sunni fighters who describe themselves as the defenders of the neighborhood disavow affiliations or even sympathies with the extremist organization. Indeed, they say they have no connections to any group at all, including Hariri’s Future Movement, ostensibly the largest Sunni political faction in Lebanon.

But the strife that erupted in the wake ofthe recent assassination of a prominent Sunni intelligence chief exposed some worrying shifts in the allegiances of Lebanon’s Sunnis that have been underway in the years since Hezbollah seized control of the streets of mostly Sunni West Beirut in 2008, inflicting a humiliating defeat on Hariri loyalists.

Tariq al-Jdeideh was the only enclave not to be overrun by the Shiite militia, after the Lebanese army intervened to prevent further bloodshed. It remains a flash point, where tempers flare whenever sectarian tensions are stoked, as they were after the killing of Brig. Gen. Wissam al-Hassan in a meticulously executed bombing on Oct. 19.

The clashes have since subsided along with concerns that his death, blamed by Sunnis on the government of Syrian President Bashar al-Assad, would herald a spillover of the Syrian conflict into Lebanon, at least for the time being.

The anger remains, however, exacerbating a growing sense of alienation from a political system that many feel has brought Sunnis few rewards.

“Our sect doesn’t help us. No one helps us. Here, it is every man for himself,” said Abu Ammar, the leader of a group of fighters who participated in the recent clashes and had gathered at a small kebab shop to discuss their grievances. “We work three jobs just so that we can buy our own weapons.”

The fighters hang the black flag not to display allegiance to any particular group but because “it represents Sunnis,” said another of the men, Mohammed Sharif, 25. “We have no leaders and we follow no one,” he said.

‘We have a vacuum’

Analysts say much of the blame for the disaffection lies with Hariri, a wealthy businessman who assumed leadership of the Sunni community after his father, Rafik, was assassinated in 2005 in a massive bombing on Beirut’s seafront also blamed by Sunnis on Syria. He lives in Paris for his safety and for the sake of Lebanon, his supporters say, a decision vindicated by the death of Hassan, who was killed less than 24 hours after returning from an overseas trip.

“It’s not about Saad Hariri. It’s about what would happen to the country if Saad Hariri got killed,” said Nadim Koteich, a prominent political talk show host with Hariri’s Future TV network. “So when Saad Hariri secures himself he is securing his country.”

His absence has eroded his authority, however, leaving a vacuum that even Hariri’s own aides fret will open the door to a far more radical interpretation of what it means to be Sunni in multi-sectarian Lebanon.

Hariri has also proved to be a weak and indecisive leader who has failed to live up to the towering reputation of his father, credited far beyond the Sunni community with helping to rebuild Lebanon after the ravages of the 1975-90 civil war.

That is acknowledged even by his staunchest supporters. “Saad Hariri is not the same as his father,” said Mohammed Doughan, 69, a resident of Tariq al-Jdeideh and lifelong Hariri loyalist who keeps a picture of both men hanging on the wall of his little car repair shop. “We have a vacuum now, and it is dangerous.”

‘The flags of al-Qaeda’

The dangers were evident on the night of Oct. 21 when the fighting flared. When Hariri sought to calm passions and urged his followers to leave the streets — in a message disseminated on Twitter — they did not, and it took an unusually forceful assertion of authority by the Lebanese army to restore order.

“This was proof that the streets are slipping from Saad Hariri’s hands,” said another area resident, Iskandar Demaji, a 36-year-old electrician who says he is deeply alarmed by the trends he sees in the neighborhood.

“And what will replace him?” he asked, gesticulating at the black flags fluttering nearby. “Let us not fool ourselves. These are the flags of al-Qaeda, and you are seeing them everywhere.”

Indeed, the black Islamic flags seen in Tariq al-Jdeideh are sprouting also in other Sunni towns, including Sidon to the south and Tripoli in the north. Ultra-conservative preachers such as Ahmed Assir, who led his followers in a series of disruptive anti-Shiite demonstrations in Sidon earlier this year and who earned the loudest cheers at Hassan’s funeral, are gaining in popularity, encouraged by a region-wide resurgence of the ultra-conservative Salafist movement in the wake of the Arab revolts.

“We would die for him,” said one of the Sunni fighters, Jamal Shamaa, to the nods of his comrades.

Beirut’s traditionally moderate Sunnis, raised in a city renowned for its bars and parties, are not about to embrace extremism in large numbers, said Koteich, citing a widely circulated photograph of a skimpily dressed woman trailing the black Islamic flag through a recent demonstration as evidence that Lebanese Sunnis don’t take seriously the ideology with which it is associated. But, he cautioned, “it only takes a minority of extremists to cause a lot of trouble.”

Hariri’s March 14 coalition now appears headed for another political humiliation that could further alienate his constituency. Its swift calls for the resignation of Lebanon’s Prime Minister Najib Mikati in the wake of Hassan’s assassination were repudiated not only by most Lebanese but also Hariri’s Western allies. The United States has expressed support for Mikati, a Sunni moderate who heads the Hezbollah-aligned government, saying that now is not the time for Lebanon to undergo a potentially destabilizing wrangle over positions.

The ill-conceived and hasty resignation call offered one example of the kind of political missteps that have characterized Hariri’s leadership, according to Emile Hokayem, a regional analyst with the International Institute of Strategic Studies. Though the vast majority of Lebanese don’t want a war, at a time when the tensions of the conflict in neighboring Syria are aggravating Lebanon’s longstanding sectarian tensions, “I worry about miscalculations and mistakes,” he said. “That’s why I fear Lebanon is headed on a downward trajectory.”