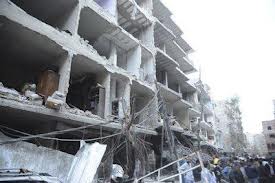 A powerful car bomb exploded in Damascus on Friday and forces loyal to Bashar al-Assad clashed with rebels across Syria as a truce intended to mark a Muslim religious holiday unraveled and activists reported at least 70 deaths.

Opposition activists said the bomb had gone off near a makeshift children’s playground built for the Eid al-Adha holiday in the southern Daf al-Shok district of the capital.

Violence was less intense than usual and activists reported no air strikes, but dozens of people were killed including 26 troops, according to the Syrian Observatory for Human Rights, which monitors the bloodshed in the country.

The Syrian military said it had responded to attacks by insurgents on army positions, in line with its announcement on Thursday that it would cease military activity during the four-day holiday but reserved the right to react to rebel actions.

The U.N.-Arab League envoy had hoped to build on the truce to calm a 19-month-old conflict that has killed an estimated 32,000 people and worsened instability in the Middle East.

Violence appeared to wane in some areas, but truce breaches by both sides swiftly marred Syrians’ hopes of celebrating Eid al-Adha, the climax of the Haj pilgrimage to Mecca, in peace.

“We are not celebrating Eid here,” said a woman in a besieged Syrian town near the Turkish border, speaking above the noise of incessant gunfire and shelling. “No one is in the mood to celebrate. Everyone is just glad they are alive.”

Her husband, a portly, bearded man in his 50s, said they and their five children had just returned to the town after nine days camped out on a farm with other families to escape clashes.

“We have no gifts for our children. We can’t even make phone calls to our families,” he said, a young daughter on his lap.

The imam of Mecca’s Grand Mosque called on Arabs and Muslims to take “practical and urgent” steps to stop bloodshed in Syria.

The Syrian conflict has aggravated divisions in the Islamic world, with Shi’ite Iran supporting Assad, and U.S.-allied Sunni nations such as Saudi Arabia, Turkey and Qatar backing his foes.

“The world should bear responsibility for this prolonged and painful disaster (in Syria) and the responsibility is greater for the Arabs and Muslims who should call on each other to support the oppressed against the oppressor,” Sheikh Saleh Mohammed al-Taleb told worshippers during Eid prayers.

For some in Syria, there was no respite from war, but by dusk the death toll was still significantly lower than in recent days, when often between 150 and 200 people have been killed.

The heaviest fighting took place around an army base at Wadi al-Daif, near the Damascus-Aleppo highway, which rebels have been trying to seize from the army for two weeks.

The British-based Syrian Observatory for Human Rights said nine soldiers were killed by rebel bombardment of the base, which completely destroyed one building, and four rebel fighters were killed in clashes around Wadi al-Daif.

Four people were killed by tank fire and snipers in Harasta, a town near Damascus, activists said. Gunfire and explosions echoed over Douma, just east of the capital. Rockets killed one person in the besieged Khalidiya district of Homs.

Clashes erupted at a checkpoint near the Mahlab army barracks in Aleppo. There was shooting at checkpoints near Tel Kelakh, on the Lebanese border, and clashes in the town itself.

Heavy machinegun fire and mortar explosions were audible along the Turkey-Syria border near the Syrian town of Haram, a Reuters witness in the Turkish border village of Besaslan said.

Rebels in the northern town near the Turkish border said a sniper had killed one of their fighters early on Friday.

“We don’t believe the ceasefire will work,” rebel commander Basel Eissa told Reuters. “There’s no Eid for us rebels on the front line. The only Eid we can celebrate will be liberation.”

Assad himself, who has vowed to defeat what he says are Islamist fighters backed by Syria’s enemies abroad, was shown on state television attending Eid prayers at a Damascus mosque.

The prime minister, information minister and foreign minister, as well as the mufti, Syria’s top Muslim official, were filmed praying alongside the 47-year-old president.

Protests against him burst out in March last year, inspired by Arab uprisings elsewhere, but repression by security forces led to an armed insurgency, plunging Syria into a civil war which neither side has proved able to win or willing to end.

A commander from the rebel Free Syrian Army had said his fighters would honor the ceasefire but demanded Assad meet opposition demands for the release of thousands of detainees.

Some Islamist militants, including the Nusra Front, rejected the truce. Many groups were skeptical that it would hold.

“We do not care about this truce. We are cautious. If the tanks are still there and the checkpoints are still there then what is the truce?” asked Abu Moaz, spokesman for Ansar al-Islam, a group whose units fight in and around Damascus.

The war in Syria pits mainly Sunni Muslim rebels against Assad, from the minority Alawite sect which is distantly related to Shi’ite Islam. Brahimi has warned that the conflict could suck in Sunni and Shi’ite powers across the Middle East.

Brahimi’s predecessor, former U.N. chief Kofi Annan, declared a ceasefire in Syria on April 12, but it soon became a dead letter, along with the rest of his six-point peace plan.