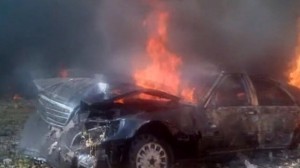 According to a report by Naharnet website several Lebanese figures are targets of possible assassinations.

The website based its findings on a report by al-Joumhouria newspaper which was published on Thursday .

According to the report a well informed western diplomatic source told al-Joumhouria that at least 18 Lebanese officials are being monitored, urging them to take the extreme precautions to protect themselves.

The source also said , every potential presidential candidate from the March 14 camp who enjoys strong popular support is also an assassination target.

The source warned that the assassins may resort to new murder techniques that had not been adopted before, such as booby-trapping an elevator as had happened in the failed assassination attempt against Harb in July.

It is important to note that all the targets are members of the anti-Syrian March 14 alliance.