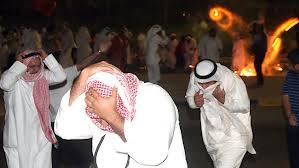 Demonstrators were allowed to gather outside parliament to protest changes in voting rules for elections set for Dec. 1. But other groups broke away and staged defiant processions through Kuwait City. No injuries were immediately reported, but the clashes highlighted the deepening tensions between Kuwait’s Western-allied ruling family and opposition factions led by Islamists.

Opposition groups have objected to changes in voting rules for the upcoming elections that they claim could undercut their rising clout in the oil-rich nation.

Kuwati has the most politically empowered parliament among the Gulf Arab states with opposition lawmakers often directly challenging government officials over alleged corruption and power abuses.

Kuwait’s deepening political crisis could bring further rifts in one of Washington’s most important Gulf allies, which now hosts the bulk of U.S. ground forces in the region following America’s withdrawal from Iraq.

Islamists and their allies took control of Kuwait’s parliament in February elections, but the outcome faced challenges from the Western-backed ruling family. Elections were set for Dec. 1 on Saturday after Kuwait’s emir also amended balloting rules to end the practice of multiple votes per person and impose a one-vote system.

It’s unclear whether the change will boost chances for government-allied candidates, but opposition groups have strongly objected to changing the ruled by royal decree rather than through public debate. Opposition leaders have threatened to boycott the upcoming elections.