How Not To Help Lebanon 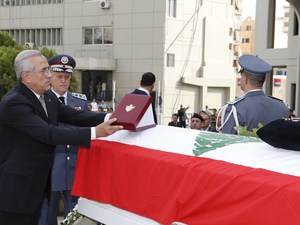 A bombing Friday in Beirut assassinated the head of the Intelligence Bureau of that country’s Internal Security Forces, Wissam Al Hassan, a Sunni officer who was a leading foe of the Assad regime and of Hezbollah.

Statement by NSC Spokesman Tommy Vietor on Attack in Beirut:

The United States condemns in the strongest terms the terrorist attack today in Beirut that killed Lebanese Internal Security Forces Information Bureau Director Wissam al-Hassan and at least seven others, and wounded dozens more. Our thoughts and prayers are with the families and friends of those killed and injured in this heinous attack and with the Lebanese people, who have sacrificed greatly to overcome war and violence. Lebanon’s security and stability are vital both for the Lebanese people and their neighbors. There is no justification for using assassination as a political tool. The United States will stand by the Government of Lebanon and the people of Lebanon as they work to bring those responsible for this barbaric attack to justice and build a future where all Lebanese can live in security and dignity.

What’s wrong with this statement?

1. It is not a statement by the President, or the Secretary of State, or the National Security Advisor. Instead it is a press release by the NSC spokesman, not even by White House Press Secretary Jay Carney. All this suggests that this attack is pretty low on the agenda of the White House.

2. The statement makes no mention of Syria, when Wissam Hassan was an opponent of the Assad regime and when every single news story on this murder notes that it is a clear sign that the war in Syrian war is now destabilizing Lebanon.

3. The statement speaks of Lebanon’s “security and stability.” What about the country’s sovereignty, which Assad’s forces are violating every day–including with this assassination? What about democracy in Lebanon, which reappeared after the murder of Rafik Hariri in 2005, and is under threat now from Syria and Hezbollah?

4. The statement says “Lebanon’s security and stability are vital both for the Lebanese people and their neighbors.” Logically, this would suggest that they aren’t important to us: we aren’t Lebanese and we aren’t their neighbors. Yet the United States has long viewed Lebanon’s fate as an important one for us, not just for Israel, Jordan, Syria, and Turkey. So the message, like the messenger (the NSC spokesman) tends to undermine America’s past, present, and future role.

5. In the aftermath of a vicious and brutal murder like this, some platitudes just make things worse. We will “stand by the people of Lebanon” so they can build a future of “security and dignity?” Again, that future apparently does not include national sovereignty or democracy, both at risk today from Hezbollah and the Assad regime. And the term “stand by” them is so vague as to have no meaning at all.

Lebanese patriots seeing this statement must be disheartened. They deserve sympathy, and genuine help– which would begin with genuine help to the rebels seeking to bring the Assad regime to an end.

Photo: President Michel Suleiman ( L) , who awarded Wissam Al Hassan the National Order of the Cedar in Grade of Grand Officer, said the slain general “managed to thwart the conspiracy and prevent it through his soul and blood.” He was referring to the Syrian terrorism plot that former minister Michel Samaha was planning to execute in Lebanon and which was thwarted by the slain Hassan