Tens of thousands of Lebanese gathered in central Beirut Sunday for the funeral of a top Sunni security chief whose assassination last week in a car bomb explosion has revived fears in Lebanon of a renewed spate of sectarian bombings and killings.

The death of Gen. Wissam al-Hassan, the head of the intelligence wing of the Internal Security Forces, has sparked protests, some violent, across the country and calls for the government’s resignation. But whether it will directly spur prolonged and deepening unrest in Lebanon is doubtful.

The leadership of the anti-Syrian and Western-backed March 14 parliamentary coalition has shown little appetite for confrontations on the street which will only aggravate rising tensions between Lebanese Shiites and Sunnis. Furthermore, the militant Shiite Hezbollah is the strongest political and military force in the country and there is no other faction in Lebanon that that can successfully confront it.

However, Lebanese Sunnis are seething with rage and resentment toward the powerful Hezbollah and areas of Lebanon where Sunnis and Shiites live beside each other are certain to remain tense and could witness periodic clashes.

Sunni and Shiite Islam: Do you know the difference? Take our quiz.

For many Sunnis, General Hassan’s death has left them feeling vulnerable.

“He represented security for all of us. He caught traitors, Israeli spies, [Syrian President Bashar] Assad’s spies,” says Maher Anadouli, a Sunni from the Tarek Jdeide neighborhood of Beirut who attended the funeral. “I don’t want to sound pessimistic about the situation, but his death has left us feeling afraid.” 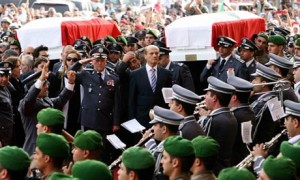 A highly-charged crowd, mainly Christians and Sunnis allied to the March 14 coalition, converged on Martyrs’ Square Sunday in scenes reminiscent of the funeral of Rafik Hariri, a former prime minister killed in 2005, and the subsequent anti-Syrian rallies that eventually compelled Damascus to withdraw its troops from its tiny neighbor.

Hassan died on Friday when a car bomb consisting of an estimated 110 pounds of TNT exploded beside his car in a narrow street in the Ashrafiyah quarter of Beirut. Another seven people died in the powerful blast, including General Hassan’s bodyguard, Ahmad Sahyouni. The March 14 coalition has accused Syria of carrying out the bomb attack.

In a speech during a funeral ceremony held at the ISF headquarters Lebanese President Michel Suleiman said Hassan’s assassination targeted the Lebanese state and called for unity among rival factions.

“Enough! Unveil the crimes, starting with the assassination of Rafik Hariri and the rest of the figures,” President Suleiman said.

A sea of flags representing political parties, banners, and pictures of General Hassan were held aloft by the crowd in Martyrs’ Square. One banner read “Remove Bashar from Lebanon.” Another banner showed pictures of Hezbollah leader Sheikh Hassan Nasrallah and Prime Minister Najib Mikati with the inscription, “The blood of Wissam is on your necks.”

Among the mourners was a group of Syrian activists brandishing the old Syrian flag adopted by the revolutionaries and chanting “God, Syria, and freedom.”

“I’m here today because of the support that the Lebanese have given our revolution,” said Burhan Agha, an activist originally from Homs, Syria’s third largest city. “Syria is behind this operation. Assad wants to start a war between the Lebanese.”

He recalled how the mass anti-Syria demonstrations in 2005 had forced the Syrian army to depart Lebanon.

“Hopefully, the death of Wissam al-Hassan will force Assad to leave Damascus,” he said, before being hoisted on to the shoulders of his comrades to lead more chants.

Gradually, politicians allied to the March 14 coalition assembled on the steps of the mosque to await the arrival of the funeral convoy. Among them was Marwan Hamade, a former minister who survived a bomb assassination in 2004, the first of a series of killings between 2004 and 2008 that left 12 politicians, journalists, and security officials dead. Beside Mr. Hamade stood Amine Gemayel, a former president whose son Pierre was assassinated in November 2006. 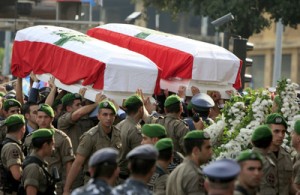 Two coffins draped with the Lebanese flag carrying the remains of Hassan and Sahyouni were carried into the mosque by ISF officers for funeral prayers. The two men were to be buried in Martyrs’ Square beside the grave of Mr. Hariri.

Under Hassan’s leadership, the ISF’s intelligence bureau broke up several Israeli spy rings operating in Lebanon and spearheaded the Lebanese investigation into the Hariri assassination. The ISF’s probe resulted in the issuing of indictments last year against four members of Hezbollah for their alleged role in Hariri’s death.

In August, the ISF arrested Michel Samaha, a former Lebanese minister and close ally of Bashar al-Assad, the Syrian president, on charges of plotting a series of bombings around the country at the behest of the Syrian regime. Mr. Samaha confessed to the charges when shown a secretly-filmed video in which he discussed the plot with his confederates. His arrest was an unusually bold step by the ISF and reportedly caused outrage in Damascus.

Following the funeral, a few hundred protesters converged on the Grand Serail, the Ottoman-era building that houses the Lebanese government, and clashed with security forces. The police and troops fired shots in the air and lobbed tear gas at the protesters who responded by throwing sticks and tearing down steel barriers.

Although the clashes ended quickly after public appeals for calm from politicians, protesters began blocking roads with burning tires in parts of Beirut and on the coastal highway leading south from the capital.