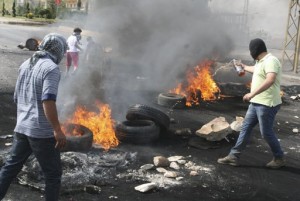 In Beirut, Sunni Muslim demonstrators set burning barricades in the streets, the day after a prominent fellow Sunni was assassinated in an attack that’s being blamed on neighbouring Syria.

Lebanese intelligence official Wissam al-Hassan died along with seven others when a car-bomb exploded in central Beirut on Friday.

He had been a vocal critic of Syria’s President Assad.

Newspaper leader writers are warning that Lebanon should ‘expect the worst’.

Local resident Shehade Skaff said: “Our house is very near to where the explosion happened. Our minds raced, thinking of our kids who were at school and at university. It is a disaster.”

Lebanese opposition figures accused Assad of the attack and called for the government in Beirut to resign. Shi-ite Hezbollah, who are allied to Damascus, play a leading role in the administration.

Both Hezbollah and Syria condemned the attack.

It was the worst bombing in the Lebanese capital since the assassination of the former prime minister Rafik Hariri in 2005.