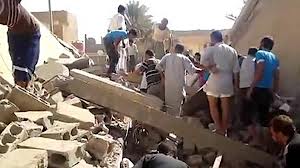 More than 70 bodies were discovered Friday night in the eastern Syrian city of Deir Ezzor in what opposition activists say was a massacre committed by government forces three weeks ago.

The victims, among them women, children and the elderly, were found dumped in a cemetery on the southern edge of a city that is a regular target of shelling and mortar fire from government helicopters and planes, said activist Muhammad Younis.

Many of the bodies had been burned and showed signs of torture, he said. Some had their hands tied behind their backs. Photos from the city show rows of charred and disfigured bodies.

The discovery came as the U.N. and Arab League envoy to Syria, Lakhdar Brahimi, arrived in the capital, Damascus, to meet with government officials and opposition members in an attempt to broker a cease-fire for the upcoming Muslim holiday of Eid Al-Adha.

Brahimi has been meeting with leaders of neighboring countries and Syria’s only regional ally, Iran, to garner support for a four-day cease-fire. But there are serious doubts that it will be successful as past efforts have failed and violence across Syria continues.

In Deir Ezzor three weeks ago, security forces raided two neighborhoods that were under government control and thought to be safe, going home to home and executing people in the streets, Younis said. Phone and Internet lines were cut so little information was known at the time about what was happening.

As some residents fled to other parts of the city, they brought with them news of seeing bodies in the streets. An activist group in the city said the people were killed as they tried to flee the neighborhood.

On Thursday residents leaving the city through a smuggling route that cuts through the cemetery said they smelled decomposing bodies. The next day, activists returned and discovered dozens of bodies throughout the graveyard.

Because many of the bodies are decomposing or burned, only about a dozen have been identified, Younis said.

“There were young children who were burned, the bodies were disfigured,” said Younis, who blamed the killings on Bashar Assad, Syria’s president. “He committed massacres so he would create chaos and fear,” Younis said.