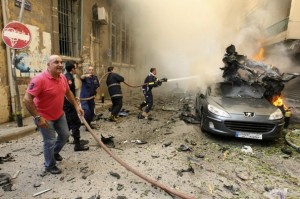 A top Lebanese security official allied to the country’s anti-Syrian factions was killed in a massive car bombing in a densely populated neighborhood of Beirut on Friday, bringing the violence threatening to engulf the region to the heart of Lebanon’s capital after several years of relative calm.

Maj. Gen. Wissam al-Hassan, who headed the Information Department of the Internal Security Forces, was among at least eight people who died in the mid-afternoon bombing in a quiet side street near Sassine Square, in the city’s mostly Christian Ashrafiyeh area

The assassination instantly intensified fears that the conflict in neighboring Syria would finally spill into Lebanon because of Hassan’s close association with the family of Sunni leader Saad Hariri, with the anti-Syrian camp in Lebanon and with a number of investigations that had exposed the role of Syria’s Lebanese allies in bombings and plots.

Hariri blamed Syrian President Bashar al-Assad for the attack, telling his Future TV network that “the one who assassinated Wissam al-Hassan is as clear as the light of day.

“The Lebanese people will not be silent on this heinous crime, and I . . . vow not to remain silent,” he said. Hariri has lived in Paris since his brief tenure as Lebanon’s prime minister ended last year following an electoral victory by the Syria-affiliated Shiite Lebanese Hezbollah movement that gave them control of the government.

“This is a big, big, big event, and one cannot begin even to think through the repercussions,” said Mohammed Chatah, an adviser to Hariri.

Lebanese braced for those repercussions as angry Sunnis, some of them armed, took to the streets in Sunni areas across Lebanon to protest the killing, elevating the likelihood that the country’s simmering sectarian tensions, already aggravated by the conflict in Syria, would erupt into outright war. Gun battles were reported in the northern city of Tripoli between Sunnis and members of the Alawite minority to which Assad belongs, along a front line that frequently breaks out in clashes when tensions in the country rise.

“There will be repercussions, they will be severe, and I’m afraid the Sunni community will not accept this,” predicted Hilal Khashan, professor of political science at the American University of Beirut.

Many have long warned that if the Syrian crisis is not contained, it will spread to the region, he added. “Now we see it is beginning to spread into Lebanon.”

Hassan was renowned for uncovering Hezbollah’s involvement in the assassination of Hariri’s father, Rafiq al-Hariri, in 2005, which led to the indictments of four Hezbollah operatives by the United Nations’ Special Tribunal for Lebanon. Before the bombing, Hassan had served as Rafiq al-Hariri’s personal security adviser.

But most of the anti-Syria politicians who accused Syria of carrying out the assassination of Hassan linked it to a sting operation in August that exposed a plot by a close ally of Assad’s to mount a bombing campaign against Sunnis allied with Syria’s rebels.

Former information minister Michel Samaha was charged in the plot along with one of Assad’s top security advisers, Gen. Ali Mamluk, after Hassan recruited an informer who recorded Samaha’s conversations outlining the plan to assassinate leading Sunnis in a string of bombings.

Anti-Syrian politicians accused Syria of carrying out the attack to rid Lebanon of a troublesome rival and to exact revenge, but also more broadly to divert attention from the government’s efforts to crush the uprising against Assad’s rule by triggering a new conflict that would remind the international community of the potential consequences of allowing his government to fall.

“The message sent today by the explosion in Ashrafiyeh is signed by the hand of Bashar al-Assad and his men,” Druze leader Walid Jumblatt told Lebanon’s LBC TV network, identifying the motive as Hassan’s role in exposing the Samaha plot.

“Assad has taken revenge against one of the most noteworthy and dedicated security men in the history of Lebanon,” he said.

Syria condemned the bombing, calling it a “coward terrorist attack” in a statement by Information Minister Omran al-Zoubi that was carried by the official Syrian Arab News Agency, or SANA.

“’Such terrorist acts are condemned and unjustifiable wherever they happen,” Zoubi said.

Hezbollah did not apportion blame. A statement by the movement hailed Hassan as a “martyr” and called for a full investigation. “The criminal behind the explosion is not yet known, and the party responsible is hidden in the chaos of the political struggle in the country,” said an announcer on Al-Manar TV, Hezbollah’s mouthpiece.

Lebanon’s rival communites, who fought a bitter and complex civil war in 1975-1990, have been polarized by the Syrian conflict, with Sunnis supporting the rebels, Shiites backing the regime and Christians dividing their loyalties between the two sides. The war drew Syrian troops into Lebanon — first as peacekeepers, then as participants and occupiers — until the 2005 assassination of the elder Hariri forced them to depart amid widespread allegations that Damascus was responsible for his death.

This latest bombing coincided with mounting evidence that both Hezbollah and the Hariri faction are being drawn more deeply into the Syrian conflict. The recent death of a senior Hezbollah commander while performing what a Hezbollah Web site called “his jihadist duty” caused a stir across Lebanon, seemingly affirming allegations by the Syrian rebels and the U.S. government that Hezbollah is dispatching fighters to aid Assad’s efforts to crush the revolt against his rule.

Meanwhile, numerous press reports have identified Oqab Saqr, a member of parliament from Hariri’s movement, as a major supplier of arms to Syrian rebels. Hariri said in a statement on the eve of the bombing that Saqr had been assigned to act as a special envoy to the Syrians fighting Assad’s rule.

Apart from a few skirmishes however, the tensions in Lebanon have until now been contained, amid many indications that Hezbollah is determined to prevent a crisis that could jeopardize its hold over the country. The collapse of the Syrian governmentr, on which Hezbollah has traditionally relied for political, logistical and military support, would isolate the movement from its chief ally, Iran, and most likely embolden the country’s Sunnis to challenge its control.

A number of recent failed or thwarted assassination attempts targeting anti-Syrian politicians had kept the country on edge, however. In one instance, a sniper’s bullet missed by inches the Christian leader Samir Geagea at his mountaintop home. In another, explosives were discovered in an elevator used by a prominent lawmaker from Hariri’s movement.

Even if the factions don’t fight, the scenes of devastation at the site of the blast revived bitter memories of the wave of assassinations that engulfed Lebanon in 2005-2008, leaving more than a dozen anti-Syrian politicians, journalists and other prominent figures dead.

The blast gouged a crater 15 feet deep and blew cars into pieces that landed blocks away, said George Azzi, who lives nearby and ran outside into crowds of screaming people, smoke and debris. “I’m worried that we’ll return to the events of the past, with random explosions all around town,” he said, expressing widespread concern that the blast may signal the start of a campaign.