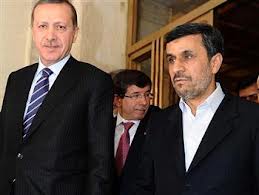 Turkish Prime Minister Tayyip Erdogan met with Iranian president Mahmoud Ahmadinejad on the sidelines of the Economic Cooperation Organization (ECO) Summit in Baku on Tuesday to discuss the possibility of Iran, Turkey and Egypt leading a peace process to end the conflict in Syria, according to Turkey’s Anadolu News Agency.

Erdogan’s plan comes on the heels of a quartet scheme recently devised by Egyptian president Mohamed Morsi which was rejected by Saudi Arabia because it involved Shiite Iran, Syria’s chief ally.

Erdogan said he proposed various scenarios for other key stakeholders to get involved in future talks on Syria.

Erdogan also said during Tuesday’s meeting that Iran and Turkey “enjoy abundant capacities for the further expansion of bilateral ties.”

“We continue to believe that the Iranians are a malign force in this, that they are actively aiding and abetting the Syrian regime and its war machine. So they can halt that activity before we would see them as productive in any multilateral efforts.”

Nuland said the U.S. did not have advance notice of Erdogan’s meeting with Ahmadinejad but said “our full expectation, based on what we know of Prime Minister Erdogan’s position, is that he was, no doubt, extremely frank with Ahmadinejad about the Turkish concerns.”

Turkey has been plagued by Syria’s uprising-turned-civil war, which has killed more than 30,000 people since President Bashar al-Assad began cracking down on protesters nearly two years ago. Turkey has absorbed countless refugees, has exchanged mortar fire with Syrian forces and has fought Kurdish rebels who have exploited the chaos in their bid for statehood.

Washington’s options are limited – it needs Turkey to defuse the crisis while making sure the region isn’t overrun by extremists.

Stratfor analyst Reva Bhalla contends that most of the major players involved – including Turkey, the U.S., Iran, Russia and the Gulf states – want to avoid regime change because they are not “prepared to weather the consequences of de-Baathification, which would dismantle the state machinery, sideline the Alawite minority and plunge the country more deeply into civil war.”

Regional experts argue that the political opposition is not a credible alternative to Assad because it is too fragmented and dominated by Muslim Brotherhood radicals. Others fear once the regime falls the country’s Sunni majority will seek retribution against minorities as extremists fill the post-Assad power vacuum.

American leaders are wary of fully supporting anti-government forces on the ground for fear of weapons falling into the hands of Islamist jihadists, including Al Qaeda elements, while U.S. military officials believe large-scale military intervention, at this point, would be counterproductive.