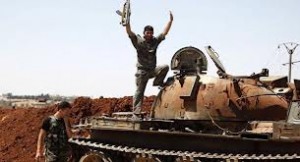 Beirut, Lebanon- Syrian rebels seized a government missile-defense base near the northern city of Aleppo on Friday that had been the source of regular attacks on surrounding villages, activists said.

Free Syrian Army rebels and an Al Qaeda-linked group called Jubhat Al-Nusra surrounded the base early Friday and fought with soldiers for hours, activists said. Around dawn they overran the base, killing dozens of soldiers and taking others hostages, said Abu Firas, spokesman for the Revolutionary Council for Aleppo and its Suburbs.

“We don’t distinguish between the groups Jubhat Al-Nusra and the other militias, as long as everyone is working toward one goal of ousting the regime,” Abu Firas said.

“These missiles of Bashar Assad were pointed at our people,” the videographer said, referring to the Syrian president.

Rebels took weapons from the base, including anti-aircraft machine guns, rocket-propelled grenades and armored vehicles, he said. But shortly after the rebels seized the base, government fighter jets attacked it, destroying the missiles, Abu Firas said.

The rebels have retreated to the outskirts of the base to avoid government shelling, he said.