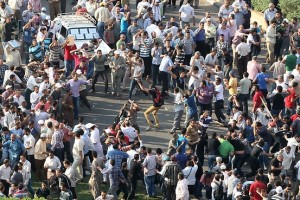 Dozens were injured in clashes between secular-leaning and Islamist activists in the heart of Egypt’s capital Friday in the first such internecine political violence since the country’s Muslim Brotherhood-backed president took office in late June.

Protests in Cairo’s Tahrir Square began peacefully on Friday morning as hundreds of activists representing liberal-leaning youth groups filed into the square opposite Islamist demonstrators aligned with the Muslim Brotherhood.

The tit-for-tat clashes erupted early afternoon on Friday when protesters who claimed to support the Muslim Brotherhood attacked and destroyed a sound-stage and sound equipment that liberal activists had used to broadcast anti-Brotherhood speeches.

By afternoon, the two sides were lobbing rocks and molotov cocktails at each other. As the sun set, more than 40 people had been injured, according to Egypt’s state news agency.

The fighting offered a microcosm of the abiding ideological division between Islamists and secular-leaning liberals that continues to complicate Egypt’s post-revolutionary transition nearly four months after the inauguration of Egypt’s first civilian president.

But like the other violent spats that have rattled Egypt’s hard-won political stability, it remained unclear whether Friday’s riots reflected a broader political standoff or a catharsis for embittered youth.

Though the Brotherhood had called for protests on Thursday, the powerful organization sought to distance itself from the rioting. As the fighting worsened Friday afternoon, the Muslim Brotherhood’s official English-language Twitter account stated that the group’s membership “are not involved in the Tahrir clashes and none of the members were there.”

The liberal groups had organized their protest to demand that Brotherhood-backed President Mohammed Morsi enact more reform-minded policies to help boost Egypt’s poor. They also called for greater secular-leaning representation on a 100-person committee charged with drafting Egypt’s next constitution.

The Brotherhood called its supporters into the square to protest a court verdict Wednesday that exonerated two-dozen leaders of the ousted regime for their role in a bloody crackdown on protests on Feb. 2, 2011, at the height of Egypt’s revolution.

In the so-called Battle of the Camels, hundreds of hired thugs and supporters of ousted President Hosni Mubarak, some of whom were mounted on camels and horses, attacked peaceful demonstrators in Tahrir Square. Twenty-six people were killed in the ensuing clashes whose images formed a symbol of the cruelty of Egypt’s ousted regime.

In response to the verdict, Mr. Morsi said Thursday that he was reassigning Egypt’s public prosecutor as ambassador to the Holy See. In a statement on Thursday, the Brotherhood, which Mr. Morsi once helped lead, criticized the prosecutors performance in the case and called for its members to protest the verdicts on Friday.

The prosecutor, Abdel Meguid Mahmoud, said in a statement Thursday night that he would defy the president’s order and remain in office.