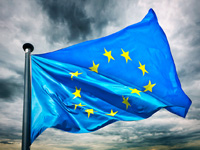 The European Union has been awarded the 2012 Nobel Peace Prize in a nod to the 27-member bloc’s “advancement of peace and reconciliation,” and to applaud its solidarity as it continues to work to contain the debt crisis hanging over the euro zone.

Thorbørn Jagland, the head of the Norwegian Nobel Committee, said that the organization wants to encourage Europe to back away from the “extremism and nationalism” that led to major conflict in years past. “This is, in a way, a message to Europe to secure everything we have achieved and move forward,” he said while addressing a packed crowd at the Nobel Norwegian Institute in Oslo on Friday.

While giving the award to the EU is somewhat surprising, it is not unprecedented to recognize an organization rather than an individual. In 2001, for instance, the United Nations and its then secretary general Kofi Annan received the peace prize. In 1988, U.N. peacekeeping forces were recognized by the award.

Chinese writer Mo Yan won the Nobel Prize for literature on Thursday, a controversial move that could help offset a blow to China’s image abroad two years after the Nobel Peace Prize went to a Chinese human-rights activist. The 2012 peace award to the EU follows the awarding of three women in Africa and the Middle East the prize in 2011, recognizing the Arab Spring with a pointed emphasis on women’s rights in that region.

EU Commission President Jose Manuel Barroso, speaking in Brussels following the announcement of the prize, said the “award today by the Nobel Committee shows that, even in this difficult time, the European Union remains an inspiration for countries and people all over the world, and that the international community needs a strong European Union.”

The EU is currently negotiating with the Nobel committee for both Mr. Barroso and EU President Herman Van Rompuy to go to the Nobel prize ceremony later this year, according to an EU official. No decision has been made on what to do with the money, but it likely will go to charity. Mr. Jagland said it is “up to the European Union” to decide what to do with the approximately $1.2 million in prize money that comes with the award and said the EU should decide how the award is ceremonially received.

In a joint statement, Messrs. Barroso and Van Rompuy said “it is a prize not just for the project and the institutions embodying a common interest, but for the 500 million citizens living in our Union.” Mr. Barroso said the committee and the international community are “sending a very important message to Europe, that the European Union is something very precious, and we should cherish it, for the good of Europeans, and indeed for the good of all the world.”

Mr. Jagland said there was “total agreement in the committee and it was not difficult to come to the conclusion.” He also acknowledged the current economic crisis.

“The EU is currently undergoing grave economic difficulties and considerable social unrest. The Norwegian Nobel Committee wishes to focus on what it sees as the most important result: the successful struggle for peace and reconciliation and democracy and human rights. The stabilizing part played by the EU has helped to transform most of Europe from a continent of war to a continent of peace.”

Mr. Jagland said “we don’t have a position on how to solve the economic crisis, but we believe it will be important to solve it and that European unity can be kept so that Europe can move forward. There are many things to say about the economic crisis—where it originated, for instance. Actually, it started in the U.S. and all of us had to deal with it.”

Portuguese Prime Minister Pedro Passos Coelho opened a monthly debate in Parliament congratulating the European Union for the prize, although he warned of a divide the crisis has brought under which financing has become too expensive in some countries, while others continue to enjoy cheaper loans.

“We need to break the link between banks and states so banks and companies can be judged based on their own merits and not based on their geographic location,” Mr. Passos Coelho said, adding a banking and fiscal union in the region is essential, including for the survival of the euro.

The Norwegian committee’s decision was widely discussed on social media, with many prominent state officials taking to the Twitter microblogging service to comment on the award.

Sweden’s Foreign Minister Carl Bildt tweeted that awarding the EU with the Nobel Peace Prize was an excellent choice that serves as a reminder of “the key importance of integration for peace, freedom and prosperity.” Finland’s Minister for European Affairs wrote that the Nobel Peace prize “was a good reminder of why the EU exists” and EU’s commissioner for international cooperation, Bulgaria’s Kristalina Georgieva, exclaimed “Proud to be European!”

The peace prize concludes a week during which Nobel institutions have awarded other prizes, including for science and literature. The Nobel Foundation, under pressure to cut costs following sluggish returns on capital in recent years, is slashing the value of its prestigious prizes for the first time in 63 years while also looking to trim in other areas, such as expenses related to its annual banquet.

Winners of the 2012 Nobel Prizes will be paid 8 million Swedish kronor ($1.2 million), representing a 20% decline from the 10 million kronor paid out last year.