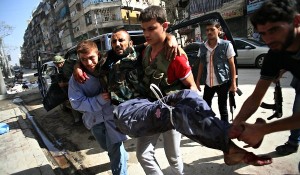 BEIRUT, Lebanon — Rebel fighters and security forces in Syria clashed near the border with Lebanon and fought over a military barracks in Aleppo on Sunday, while Turkish artillery fired into Syria for a fifth consecutive day in retaliation for cross-border shelling.

Around the same time, a Syrian shell landed about 200 yards across the border from Tal Abyad, near the town of Akcakale in Turkey, The Associated Press reported. Akcakale is the town where a Syrian mortar shell killed Turkish civilians on Wednesday, prompting the Turkish government to announce a policy of retaliation for every shell that strays across the border. Turkish forces fired eight shells back into Syria on Sunday. The mounting tensions at the border have raised international concerns that the 18-month-old internal conflict in Syria could draw in neighboring countries or even the NATO alliance, to which Turkey belongs.

It was not clear who had fired the shell that landed in Turkey on Sunday, or why. It is not uncommon for mortar and artillery shells to miss their intended targets by significant margins.

Later on Sunday, antigovernment activists reported clashes between rebels and security forces near an artillery position in Tal Abyad.

In Aleppo, the government news service said, the army killed “many terrorists” who tried to infiltrate a military barracks. Earlier, the antigovernment Tawhid Brigade said its fighters had penetrated the Hanano military barracks on Sunday and were fighting government forces inside the compound. A spokesman for the rebel unit, who gave only a nickname, Abu Muhammad, said that in the fight for the barracks, fighters from his unit were joined by members of Jabhet al-Nusra, an insurgent group said to have ties to Al Qaeda. The government reported killing seven members of Jabhet al-Nusra and destroying 16 vehicles mounted with heavy machine guns.

Concerns about rebel affiliation with extremist groups have cut both ways in the debate over whether the United States and other countries should offer more direct support to the insurgency. American officials worry that if more powerful arms are given to the rebels, the weapons will fall into the hands of extremists and be used in terrorist attacks. But some rebels have warned that by denying them the aid they need to win on their own, the West will force the rebels to ally with extremists and their sponsors.

Activists reported fierce shelling near the Aleppo citadel, which dates from the 12th century, and said that about 20 shells fell on Al Sakur, a neighborhood, in a span of a few minutes. The government said that insurgents opened fire on people demonstrating in support of the army.

None of the reports of fighting could be independently verified because of restrictions on reporting in Syria.

Intense fighting also broke out on Sunday in Syrian villages near the border crossing that leads to the Bekaa Valley in Lebanon, according to Syrian television and antigovernment fighters and activists. Syrian television said that security forces battled armed groups that had entered the country from Lebanon near the town of Qusayr.

Abdullah, a rebel fighter, said in an interview that Syrian security forces based in the Christian village of Rableh were fighting insurgents based in a nearby Sunni Muslim village, Zira’a. The account squared with the accounts given by Syrian refugees reaching Lebanon, who have said that villages in the area are being divided by the conflict. Many rebel fighters fleeing the repeated government offensives in Homs have gone to Qusayr.

Abdullah, who said he crosses the border in that area, said rebels had carried out a successful attack there on Saturday.

Fighting was also reported on Sunday around Damascus, in Homs and in Dara’a Province in the south, bordering Jordan.

Photo: Fighters of the Free Syrian Army carried a wounded comrade to a field hospital in Aleppo on Sunday.