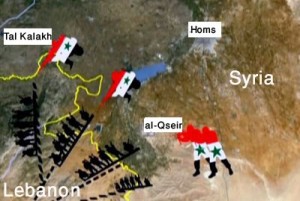 Syrian state TV says soldiers have clashed with two armed groups that infiltrated from Lebanon, killing several of them.

The clashes took place in the suburbs of the central city of Homs, which is near the border. Syrian forces chased the groups back into Lebanon, the TV reported on Sunday.

The TV report said the clashes erupted late Saturday. No other details were immediately available.

Also Sunday, Syrian troops pressed their offensive to retake rebel-held areas in the northern city of Aleppo, Homs, towns around the Syrian capital of Damascus and southern villages on the border with Jordan, according to the London-based Syrian Observatory for Human Rights,

The group said there were casualties in Sunday’s fighting, but it did not give figures.