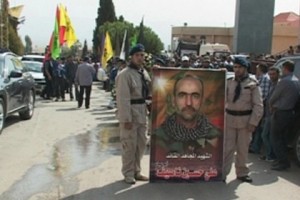 A Hezbollah commander and several other fighters from the Lebanese Shiite militant group have been killed in Syria, a senior Lebanese security official and Syrian activists said Tuesday.

Hezbollah, which is backed by both Syria and Iran, is a strong ally of President Bashar Assad’s embattled regime and has long been accused by the Syrian opposition of assisting Damascus in its crackdown on the 18-month-old uprising — a claim the group has repeatedly denied.

The security official said Hezbollah commander Ali Hussein Nassif’s body was returned to Lebanon through the Masnaa border crossing on Sunday. Speaking on condition of anonymity in line with regulations, he said several other Hezbollah fighters bodies have been brought back to Lebanon in the past few days.

It was not immediately clear how the militants were killed or whether they had been fighting alongside the Syrian army.

Samer al-Homsi, an activist in Syria’s central Homs province, which borders Lebanon, said Nassif was killed Saturday when a roadside bomb hit the car he was riding in near the town of Qusair. He said Nassif and several other people were killed in the blast that also damaged the vehicle.

“His job was to coordinate with Syrian security agencies,” al-Homsi said via Skype. He added that the rebels detonated the bomb “without knowing” that the target was a Hezbollah official.

“We knew he was a Hezbollah official after it was announced by the group in Lebanon,” he said.

Hezbollah’s reputation has suffered severely for siding with the Assad regime even after supporting revolts in Egypt, Tunisia, Libya and Bahrain. Confirmation that the group’s members are fighting alongside the regime in the Syrian civil war would likely stoke resentment against the group among many Syrians and Lebanese who fear the conflict would mutate into a wider regional conflict that would pull in Lebanon because of Hezbollah’s involvement.

Lebanon’s sectarian tensions have already been worsened by the crisis in Syria, where the overwhelmingly Sunni opposition is struggling to oust a regime dominated by Alawites, an offshoot of Shiite Islam.

Hezbollah’s newspaper al-Intiqad said Nassif, who is also known as Abu Abbas, was a Hezbollah commander and was killed “while performing his jihadi duties.” It did not say when or where he was killed.

His funeral, which was held Sunday in the eastern town of Budai, near Baalbek in Lebanon’s eastern Bekaa Valley, was attended by top Hezbollah officials including the head of the group’s judicial council, Sheik Mohammed Yazbek, and the head of the political bureau, Sheik Ibrahim Amin al-Sayed.

On Tuesday, Hezbollah’s Al-Manar TV showed the funerals of at least two other Hezbollah members it said were killed while performing their “jihadi duty.”

The coffins of the dead were draped with Hezbollah’s yellow flags and carried by militants in black uniforms and red berets. Hundreds of people marched in the funeral.

Hezbollah spokesman Ibrahim Moussawi confirmed the deaths but said he had no further information on where or how Nassif was killed. He declined further comment.