Contrary to what was publically claimed, the documents reveal that the pilots survived the crash, but were later executed by the regime of Syrian President Bashar al-Assad!

This disclosure is the first in a series of revelations based on a number of newly-leaked and highly classified Syrian security documents which will be aired in a special program produced by Al Arabiya over the next two weeks; the channel’s English portal – http://english.alarabiya.net – will be carrying a subtitled version of the program on daily basis as well as publishing downloadable copies of the leaked documents.

The documents were obtained with the assistance of members of the Syrian opposition who refused to elaborate on how they laid hand on the documents.

Al Arabiya said that it has verified and authenticated hundreds of these documents and that it is has decided to disclose the ones with substantial news value and political relevance.

On June 22, a Turkish military jet was shot down by a Syrian missile in international airspace, Ankara’s official report said; a claim Damascus has refuted.

Assad’s regime said the country’s defense forces shot down the two-seater F-4 Phantom as it was in the Syrian airspace.

In an interview with Turkish paper Cumhuriyet published in July, Assad said he wished his forces did not shoot down the jet, claiming that Damascus did not know the identity of the plane at the time.

The incident set off tensions between the former allies, but Ankara, which had vowed a harsh response to any border violations by Syria, limited its reaction to sending military reinforcements to the common frontiers.

The two pilots on board of the jet were killed.

But both official reports by Syria and Turkey have restrained their explanation on the causes of the deaths of Air Force Captain Gokhan Ertan and Air Force Lieutenant Hasan Huseyin Aksoy.

Turkey’s armed forces said it had found the bodies of both pilots on the Mediterranean seabed.

“The bodies (of the two pilots) have been recovered [from] the seabed and work is underway to bring them to the surface,” the army command said in a statement released early in July.

The military did not specify where the bodies were found, but there has been no report that the pilots ejected from the plane.

However, after investigating the leaked documents it obtained, Al Arabiya can now reveal for the first time an alternative narrative of what might have happened to the two Turkish pilots.

One highly confidential document was sent directly from the presidential office of President Assad to brigadier Hassan Abdel Rahman (who Al Arabiya’s sources identify as the chief of the Syrian Special Operations Unit) states the following:

“Two Turkish pilots were captured by the Syrian Air Force Intelligence after their jet was shot down in coordination with the Russian naval base in (the Syrian city of) Tartus.”

The file therefore reveals two critical reports. First, the pilots were still alive after the plane had crashed. And second, that Russia held its share of involvement in this secretive mission.

The same document orders the concerned parties to treat both Turkish pilots according to the protocol of war prisoners, as instructed by the president.

It also requests that both men be investigated about Turkey’s role in supporting the Free Syrian Army (FSA), the country’s main armed opposition group.

The report also suggests the possibility of transferring the pilots into the neighboring Lebanese territory, leaving them in the custody of Assad’s ally, Hezbollah.

However, if the Turkish air commanders were not killed upon the crash of their F-4 Phantom, further leaked documents confirm that their death was inevitable.

A subsequently leaked file, also sent from the presidential palace and addressed to all heads of units of the Syrian foreign intelligence, reads: “Based on information and guidance from the Russian leadership comes a need to eliminate the two Turkish pilots detained by the Special Operations Unit in a natural way and their bodies need to be returned to the crash site in international waters.”

The document also suggests the Syrian government sends a “menacing” message to the Turkish government, insinuating Syria’s capability of mobilizing Kurdistan’s Workers Party (PKK) on the Turkish borders, notifying Ankara from the danger it might face in case of any hostile move.

The report insists that the Syrian leadership should hasten and make a formal apology to the Turkish government for bringing down the plane, which would embarrass the Turks and win the support of international public opinion. As such, the Syrian Regime did apologize. 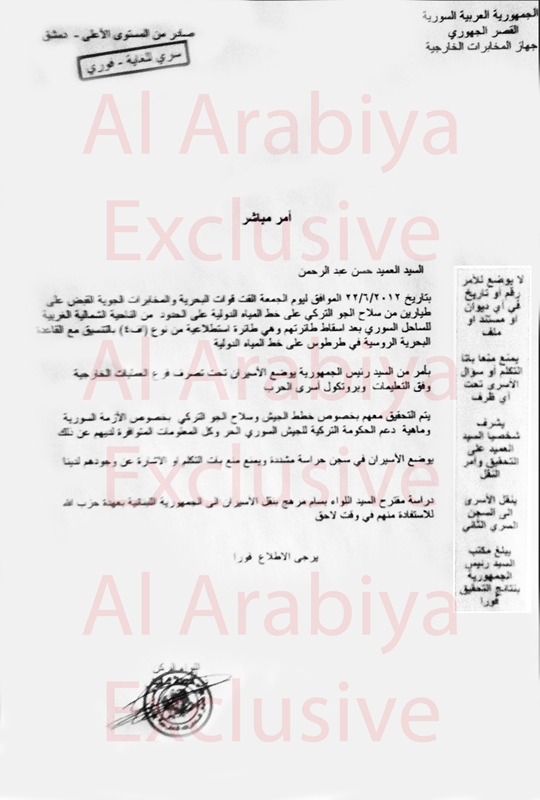