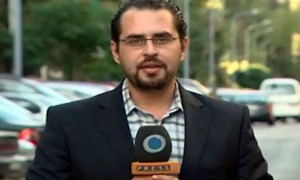 A corespondent for Iran’s Press TV was shot dead on Wednesday while reporting from the scene of devastating twin explosions in the Syrian capital, Damascus.

The channel’s Damascus bureau chief, Hussein Murtada, who also worked for the Arabic-language Al-Alam TV network, was injured after coming under attack, the channel said.

Naser tweeted news of the explosions soon after 7am on Wednesday. He then appears to have set off with his Lebanese colleague to the scene, as fierce fighting continued. Murtada was reportedly shot in the back.

Nasser, reportedly a Christian, was one of the few correspondents based in Damascus to have reported on Syria’s brutal war in English.

His blog had been sympathetic to the Syrian government, and blamed the conflict on the “west and al-Qaida”. It gave a vivid portrait of life under fire and the perils of driving through checkpoints.

Writing in July, Nasser described waking up after midnight in Damascus, under a full moon, and hearing the sound of the army shelling rebel sites in the outskirts. He wrote: “Is this real … is my country on fire?” He mentioned “lunch with my beloved girlfriend”.

He went on to say that “killings and counter killings” had become a regular part of life in Syria. His post ended: “Bottom line is; my people are dying and I am waiting my turn.”

Writing on Twitter, Naser made little secret of his whereabouts, and frequently argued with opponents of the regime. He lamented the loss of life on both sides and the suffering of Syrians. “In wars like this there is no winner or loser,” he observed two days ago.

His last TV report this week was on Syria’s official opposition.

Press TV on Wednesday pinned the blame for his death on “Turkey, Saudi Arabia and Qatar” which, it said, had armed Syria’s opposition and allowed it to kill soldiers and civilians.

“Press TV will pursue the matter of the murder of Maya and would not let those who killed the correspondent feel like they can kill the media people and get away with it,” said the channel’s newsroom director, Hamid Reza Emadi.

The conflict in Syria has been the deadliest of the Arab spring by far for media workers, for those reporting officially from Damascus, and for correspondents who have entered the country with the rebel Free Syrian Army.

The Syrian regime has given visas to only a handful of western correspondents, with most reporters based in Damascus working for Russian or Iranian networks sympathetic to the president, Bashar al-Assad.

The Committee to Protect Journalists, an independent press freedom organisation, said that more than 20 foreign and Syrian journalists had been killed in Syria since the revolt against Assad had begun in March 2011.

Those who have died include war correspondents. Marie Colvin was killed during the siege of Homs in February. Syrians working for pro-regime media have also been killed.

Iran has been Damascus’s most stalwart regional neighbour. English language Press TV has reflected this official support. Its licence to broadcast from the UK was revoked in January by the UK regulator, Ofcom.