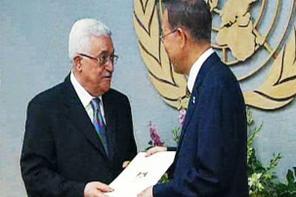 The Palestinians will restart their diplomatic campaign for an independent state next week, with an appeal to the UN General Assembly to upgrade the official Palestinian status at the global body – and to pass a resolution backing a state within 1967 borders.

Saeb Erekat, the chief Palestinian negotiator, said the upgrade would make it easier for the Palestinians to join other international bodies and agencies, undermine any Israeli claim to the occupied territories and cement the pre-Six Day War borders as the basis for future negotiations between the two sides.

Speaking to reporters on Thursday, Mr Erekat suggested that the Palestinians would ultimately seek to join the International Criminal Court – a prospect that has long caused concern among Israeli policy makers.

Mr Erekat said the new Palestinian move would be at the centre of a speech to the General Assembly by Mahmoud Abbas, the president of the Palestinian Authority, next Thursday. The actual resolution, however, would be drafted and tabled only after consultations with other countries, and could be delayed until after the US presidential election in early November.

The renewed diplomatic effort comes a year after the Palestinians formally asked the UN to accept Palestine as a full member state. That application, however, was never brought to a vote at the UN Security Council, the only body that can grant full member status. The failure was not least the result of pressure from the US, which said it would use its veto power to thwart the Palestinian move.

This time, the Palestinian aspiration – which stops short of asking for full UN membership – is both more modest and more likely to succeed.

A request to the General Assembly will almost certainly gain a strong majority, because the Palestinians can usually rely on the backing of most countries from Africa, Asia, Latin America and the Arab world. Mr Erekat said the Palestinians were hoping to win 150-170 votes in the assembly, which currently has 193 member states.

With a majority in the assembly all but certain, the only way of stopping the upgrade would be for the US and other countries to persuade the Palestinians to shelve their effort voluntarily.

“They will face a huge amount of pressure,” one western diplomat predicted.

European governments, meanwhile, will face a sharp dilemma: most are supportive of a Palestinian state, and are keen to show their support for Mr Abbas at a time when his administration faces both political and financial pressure. At the same time, there is a strong desire in many European capitals not to leave the US and Israel isolated at the UN.

Both the Israelis and the Palestinians regard European support for their position as a crucial measure of diplomatic success. Israel is hoping that big EU states such as Britain, France and Germany will either abstain or vote against a Palestinian resolution at the UN, while the Palestinians would be disappointed not to receive backing from these and other European countries.

By Tobias Buck in Jericho