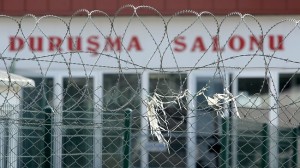 A Turkish court on Friday convicted 326 military officers, including the former air force and navy chiefs, of plotting to overthrow the nation’s Islamic-based government in 2003, in a case that has helped curtail the military’s hold on politics.

A panel of three judges at the court on Istanbul’s outskirts initially sentenced former air force chief Ibrahim Firtina, former navy chief Ozden Ornek and former army commander Cetin Dogan to life imprisonment but later reduced the sentence to a 20-year jail term because the plot had been unsuccessful, state-run TRT television reported. The three were accused of masterminding the plot.

The court also convicted 323 other active or retired officers, including a former general elected to Parliament a year ago— of involvement in the conspiracy, sentencing some to as much as 18 years in prison. Thirty-six were acquitted, while the case against three other defendants was postponed.

The officers were all expected to appeal the verdicts.

The trial of the high-ranking officers — inconceivable in Turkey a decade ago — has helped significantly to tip the balance of power in the country in favor of civilian authorities.

Turkey’s generals have staged three coups since the 1960s and forced an Islamist government to quit in 1997.

But the current government of Prime Minister Recep Tayyip Erdogan has grown ever more confident with each of its three electoral successes since 2002, and has been limiting the powers of the armed forces which have long seen themselves as the guardians of Turkey’s secular traditions.

Erdogan’s government has hailed the trial, which began in December 2010, and other similar ones as a break with a tradition of impunity and a move toward greater democracy.

However, the officers’ case — dubbed “Sledgehammer” after the alleged conspiracy — has been marred by the suspects’ long confinement without a verdict and some judicial flaws, including allegations of fabricated evidence. The government’s secular critics have denounced the coup plot trials as a ploy to intimidate opponents.

Some defense lawyers have refused to appear in court for the past five months, saying the authenticity of some of the evidence was not investigated.

Erdogan said he hoped Friday’s verdict was a “just” one but refused to comment further, saying he had not seen the reasoning behind the verdicts and the proceedings against the military officers were not over yet.

“We have to see the appeals phase,” Erdogan said. “The final dot has not been placed yet. The process is continuing.”

Transportation Minister Binali Yildirim said: “We all hope that no anti-democratic initiative ever occurs in our country again.”

Prosecutors accused the 365 defendants in the trial of plotting to depose Erdogan by triggering turmoil in the country that would have paved the way for a military takeover. They claimed the plotters, taking part in an army seminar in 2003, drew up plans for a coup which included bombings of mosques, the downing of a Turkish fighter plane and other acts of violence that would have allowed the military to intervene on the pretext of restoring order.

The military has said officers taking part in the seminar discussed a fictitious scenario involving internal conflict, but that there were no plans for a military coup.

Protests broke out soon after Friday’s verdicts were announced, Hurriyet newspaper reported, with some of the officers’ supporters booing the decision inside the courthouse and others waving Turkish flags and shouting “Turkey is secular and will remain secular” outside.

Celal Ulgen, the lawyer defending Dogan — accused of being the main ringleader — called the court’s decision unjust and unlawful. “Their rights to defend themselves were violated,” Ulgen told NTV television. “There is no independent judiciary.”

Dogan said in his final defense statement Thursday that the trial was a political one designed to undermine the military. “It is a case assembled to make soldiers, be they active-duty or retired soldiers, pay the penance for their loyalty to the republic and its (secular) principles,” he said.

More than 400 other people — including journalists, academics, politicians and soldiers — are also on trial on charges of involvement in a conspiracy by an alleged gang of secular nationalists called “Ergenekon.”

The former head of the Turkish armed forces, Gen. Ilker Basbug, and other military officers are, meanwhile, awaiting trial in a separate case.

Two elderly leaders of Turkey’s 1980 military coup, Kenan Evren and Tahsin Sahinkaya, are being prosecuted for the military takeover that saw many cases of torture, disappearance and extrajudicial killings.