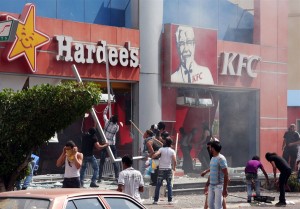 14 people have been arrested in the assault on the KFC, Hardee’s fast food outlets and the Serail during protests against an anti-Islam U.S. film last week, according to Tripoli police chief

Brig. Gen. Bassam al-Ayyoubi said the 14 suspects had set alight the fast food restaurants and tried to storm the Tripoli Serail in protests over the low-budget film “Innocence of Muslims” that has fanned global Muslim anger.

Police have information on 22 other people involved in the attacks and a manhunt is underway to arrest them, Ayyoub said adding :“No one has (political) cover and security forces will go ahead in their mission.”