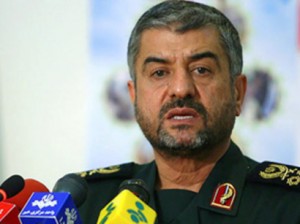 An Israeli war on Iran “will eventually happen” but the Jewish state will be destroyed as a result, the head of Iran’s elite Revolutionary Guards reportedly said in comments published on Saturday, the first time that Iran has acknowledged the probability of open armed conflict.

“War will happen but it is not certain where and when,” General Mohammad Ali Jafari said, according to the ISNA and Fars news agencies.

“The shameful and cancerous tumour that is Israel is seeking war against us, but it is not known when that war will happen. They now consider war as the only way to confront us, but they are so stupid that their (US) masters should stop them,” he said.

“If they begin (aggression), it will spell their destruction and will be the end of the story,” he said.

“This (war) will eventually happen as the (Islamic) revolution is moving rapidly towards its goals, and they cannot tolerate this. And finally, they will impose a war situation.”

The comments were the first time Iran has acknowledged the probability of open armed conflict with Israel. Previously, it has dismissed such a scenario as bluff on the part of Israel’s leaders.

Tensions, though, have risen significantly in recent weeks, with Israel threatening to unleash air strikes on Iranian nuclear facilities.

Israel believes Iran’s nuclear programme to be aimed at developing an atomic weapons capability that would menace its own existence, and its current status as the Middle East’s sole, if undeclared, nuclear weapons power.

Iran insists its programme is exclusively for peaceful, civilian ends, but it is locked in a deepening standoff with the UN nuclear watchdog and the UN Security Council over the issue.

Jafari said that, “even if they (the Israelis) act rationally, this incident will happen.”

He added: “Everyone knows that they cannot confront the power of the Islamic republic … But there is no guarantee of rationality, and it is possible that they will go crazy” and attack.

He said a war with Israel would contrast with Iran’s last war, the 1980-1988 conflict with Iraq that was characterised by invasion and counter-invasion by massed ground troops.

“We should use the experience of the sacred defence (during the Iran-Iraq war) to prepare for the future war, because its nature will be very different from the previous war,” he said.

Fars quoted Jafari as saying that “we are putting all of our efforts into boosting our (military) capability so that if an aggression occurs we can defend ourselves and those who need our help.”

He added: “We have become more serious in the face of the threats of the enemy against our country.”

Jafari’s abrupt public recognition of the seriousness of the Israeli threat came against the backdrop of military deployments by Iran, Israel and the Jewish state’s ally, Washington.

Iran has held several war games this year, including one pointedly showing its abilities to close the strategic Strait of Hormuz in the Gulf to oil tanker traffic should it be attacked.

In an annual military parade on Friday, it also displayed several of its missiles, including ballistic weapons capable of striking Israel.

Israel on Wednesday staged a surprise drill on the country’s northern border with Syria, Iran’s beleaguered ally. Next month it is to hold missile defence exercises with US forces.

The United States, meanwhile, is leading 30-nation navy manoeuvres in the Gulf and has deployed a squadron of its top-end F-22 Raptor fighter jets to the United Arab Emirates.