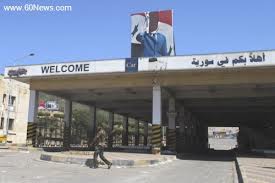 Television footage showed a rebel tearing down the Syrian flag on top of what appeared to be a customs building at the Tel Abyad frontier gate. Minutes earlier sporadic gunfire could be heard and black smoke rose from parts of the building.