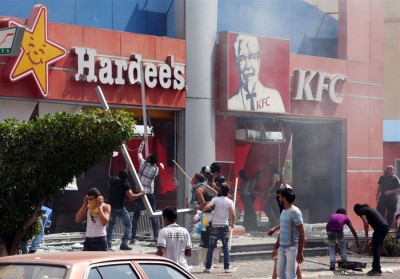 Protesters in a number of countries across the Muslim world vented anger against the West on Friday as the controversy over an anti-Islamic film raged, with a KFC restaurant torched in Lebanon, violent attacks on U.S. embassies in Sudan and Tunis and fierce protests in Egypt, Jordan and Pakistan.

U.S. embassies and consulates are braced for trouble on the Muslim day of prayer, when demonstrations are often held, following the attack on the consulate in Benghazi, Libya, which killed U.S. Ambassador Christopher Stevens and three other Americans.

One observer commented as he watched the mob venting anger   over the  anti-Islamic film  . “What have these fast food outlets  to do with the film ?”