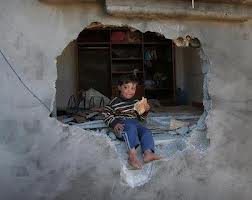 Beirut , Lebanon- Syrian government troops stormed an area of Damascus populated by Palestinian refugees on Saturday after a four-day artillery assault on the southern suburb where rebels have been sheltering, opposition activists said.

President Bashar al-Assad’s forces have largely preferred to use air power and artillery to hit areas where rebels are dug in, deploying infantry only once many have fled. Activists said the new ground onslaught put civilians at risk.

The almost 18-month-old conflict also spilled further over borders when three rockets fired from Syria crashed into an Iraqi frontier town, killing a 5-year-old girl, according to local inhabitants and Iraqi officials.

Anxious to end the bloodshed, European Union diplomats said on Saturday the 27-nation bloc might impose new sanctions on he Syrian government as soon as next month.

Speaking after visiting a Syrian refugee camp in Jordan, German Foreign Minister Guido Westerwelle said he saw “the first signs of erosion in the regime of Assad”.

“It is necessary we isolate the regime of Bashar al-Assad,” he told a news conference.

“We will use the next weeks while Germany has the presidency of the (U.N.) Security Council to work on this isolation and to increase the pressure on this regime. We think he has gone too far and his time is over.”

Assad’s use of military force to quell an uprising that began as a peaceful pro-democracy movement has cost him many allies in the Arab and Muslim world and caused a trickle of defections from Syrian government and army ranks.

Two Syrian diplomats in Malaysia announced late on Friday that they had joined the opposition, according to a report by pan-Arab television channel Al Arabiya.

But the defections so far are seen largely as symbolic and Assad has increasingly relied on a close circle of relatives and senior members of his minority Alawite sect dominating the ruling elite to maintain his family’s 42-year-old grip on power.

Syrian activist Abu Yasser al-Shami said that friends living in Yarmouk, a densely populated Palestinian refugee camp in Damascus where 10 people were killed on Friday in shelling, had fled the area on Saturday after government troops swept in.

“Assad’s forces stormed al-Basel hospital in Yarmouk Camp and arrested many of the injured civilians,” he said over Skype.

When insurgents thrust into central parts of the capital in July, they were swiftly pushed back to southern districts, like Yarmouk, where there is a thinner state security presence.

Activists say Assad has been reluctant to use infantry as the army is made up mostly of conscripts drawn from the Sunni Muslim majority, many of whom are seen as desertion risks.

Residents complain that the army uses indiscriminate artillery and air strikes. Palestinians have been divided over whether or not to support Assad, but there are signs that more and more are now starting to back the uprising against him.

The Syrian Observatory for Human Rights, an opposition watchdog based in London, said shells rained down on Hajar al-Aswad district, which neighbours Yarmouk, on Saturday.

It said 170 people were killed in bloodshed on Friday across the country, many of them in Damascus and northern Aleppo, where rebels say they control more than half of what is Syria’s most populous city and commercial centre.

The Observatory says more than 23,000 people have died in an uprising that has lasted more than 17 months. About 200,000 Syrians have fled to Turkey, Jordan, Iraq and Lebanon.

The conflict has edged ominously over Syrian borders into neighbours with sectarian tensions echoing those of Syria, where mainly Sunni insurgents are pitted against Assad’s Alawite community whose faith is an offshoot of Shi’ite Islam.

As rebels fought government forces for an airfield and military base near the Syrian border town of Albu Kamal, Katyusha rockets hit a residential area of al Qaim in Iraq, smashing through a wall of one house and killing a girl inside.

“She was sitting on my lap just before we heard the rocket. I knew she was dead immediately after the explosion,” said Firas Attallah, the girl’s father, showing a bloodstained mattress amid the shattered glass in his home.

The Syrian war has caused jitters in Iraq’s Shi’ite Muslim-led government. Close to Bashar al-Assad’s ally, Iran, Baghdad has resisted joining calls for the Syrian leader to step down.

In smaller Lebanon, the issue of Syria is explosive and the Lebanese government has tip-toed around the topic. But former Lebanese Prime Minister Saad Hariri told the Al-Hayat newspaper on Saturday that Lebanon’s stance of dissociation from the Syrian conflict was “shameful”.

“The self-distancing policy allows the Syrian regime to shell Lebanese villages,” he said, referring to several incidents when Syrian forces have fired artillery across the borders at villages they say are harbouring insurgents.

Lebanon’s army forces raided a southern district of Beirut late on Friday and arrested a member of a powerful Shi’ite clan which has claimed responsibility for the kidnapping of 20 Syrians and a Turkish businessman.

The army arrested Hassan Meqdad, from the Meqdad clan, which abducted the men on Aug. 15 in what they said was a response to the capture of one of their kinsmen in Damascus by the rebel Free Syrian Army.

Damascus continues to exert influence over is smaller neighbour and even had troops garrisoned in Lebanon until 2005.

The United States has accused Russia and China of effectively prolonging Syria’s bloodletting by blocking efforts at the U.N. Security Council to approve tough sanctions aimed at reining in the Assad government.

Russian Foreign Minister Sergei Lavrov said at a summit of Pacific rim states that Moscow and Western powers remained at loggerheads over how to defuse the conflict – a diplomatic impasse in which Western officials say violence has flourished.

“Our U.S. partners prefer measures like threats, increased pressure and new sanctions against both Syria and Iran. We do not agree with this in principle,” Lavrov told reporters. Russia and Iran are Assad’s closest allies.

Washington has angered Russia by going outside the United Nations to work with allies on the Syrian opposition’s behalf. But U.S. Secretary of State Hillary Clinton told Lavrov it was possible to return to the United Nations if Moscow and Beijing were ready to forego their vetoes and back stronger measures.