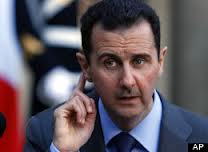 This absurd factoid about the now-floundering president came to light on Thursday, in an interview with opposition hacker Abdullah al-Shamri gave to the Arabic language newspaper Al-Hayat.

In February, under the aegis of an opposition group, Shamri’s confederates released 3,000 of Assad’s private emails to the Guardian. But until Al-Hayat published Shamri’s interview on Thursday, the world knew little of the hackers themselves, or of the absurd tale that was their break-in.

The Times Of Israel reports:

After a week of attempting to decipher what they thought would be an enigmatic code protecting Assad’s private correspondences, one of the sophisticated cyber-burglars tried ‘thinking like an idiot,’ Al-Hayat reported Thursday.

‘You’re doing it wrong,’ said hacker Abdullah Shamri, recalling for the paper the moment at which epiphany struck one of his criminals-in-arms. ‘You always call the heads of the regime morons, so let’s try to work like morons’.

An enterprising hacker immediately tried a password widely acknowledged to be one of the most imbecilic possible: 1234…Within moments the hackers had at their fingertips a trove of private missives belonging to the dictator of Damascus.

But 1234 isn’t just a bad password; it is, as the Times of Israel notes, widely acknowledged to be one of the most imbecilic password possible, thanks to the famous scene in “Spaceballs”.

Shamri and his group didn’t release the emails immediately upon cracking the code, however. For eight months, they used this exclusive access to read the private emails of Assad and his wife Asma, looking for a “devastating revelation” that would help “oust” the regime, the Guardian reports.

They did not find it, but they did, however, find valuable information, including some they later used to protect opposition leaders and Western journalists in Homs.

But as Shamri and his confederates waited to move and the civil war in Syria escalated, another tribe of hacktivists turned interested in the regime: the hacker group Anonymous.

In January of 2012, Anonymous broke into the mail server of the Syrian Ministry of Presidential Affairs and gave whistleblowing-site Wikileaks 2.4 million formerly regime-eyes-only emails. By Feb. 7, the owner of the sam@alshahba.com address was known, and Assad began receiving threatening emails. He closed the presidential account the same day, according to Information Week.

Ironically, Assad did appear to have knowledge of security procedure, at least in the way he treated his email account. he deleted his mail after reading and never attached his name or initials to any email he sent from sam@alshahba.com. But in other ways, he and his wife were woefully out of touch.

After the missives leaked to the Guardian, blog Foreign Policy reported that “Asma is apparently an Internet shopaholic, buying enough luxury items to stock a Tom Wolfe novel: Necklaces of amethyst, diamond, and onyx; a Ming Luce vase; and roughly $15,000 worth of candlesticks, tables, and chandeliers” — all while the country was falling apart around her.

Assad, meanwhile, “made light of reforms he had promised in an attempt to defuse the crisis, referring to ‘rubbish laws of parties, elections, media'” and at one point forwarded to an aide “a link to YouTube footage of a crude re-enactment of the siege of Homs using toys and biscuits,” the Guardian reports.

At the beginning of the Syrian crackdowns, Shamri was running the Internet’s first Arab-language information network, and he also moonlighted as an opposition blogger.

I received a call from a Presidential Office official, who told me: ‘We used to hold a grudge against you. However, we found out that although your words are cruel, they speak the truth. I cannot deliver your articles to the President. I will give you his private and confidential e-mail and you send him your articles in your own way’.

Originally, Shamri planned to use the emails to petition the president for reform, but when the crackdowns worsened and his emails stayed unanswered, he decided to hack the president’s account instead.

Now the Guardian claims it has 3,000 of Assad’s emails, and Shamri says he has “7,500 Emails”, many unseen, that “blow the lid off the President’s secrets.”

In the leak to the Guardian, the hackers claimed their motive was to “show the world what this regime is like.” Now, says Shamri, he plans to sort and document the emails for “recorded history.”