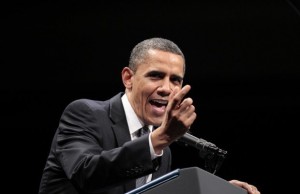 They moved the final night of the DNC convention indoors because there was a chance of rain. Back inside Time Warner Cable Arena for a third night, it could just as well have been an open-air event because Joe Biden and Barack Obama raised the roof with their speeches.

Democrats got what they came for as the 2012 convention came to a rousing close.

Biden spoke first, sometimes soft-spoken as though he was giving fatherly advice and other times boisterous and angry as he drove his message home. It didn’t matter to the partisan audience that much of his text was filled with discrepancies and distortions. This was a party; a time to rejoice, and that was all that mattered.

Barack Obama, on the other hand, was his usual masterful self. His timing and pacing were pure Obama in the manner we have become so accustomed to since his rise to prominence in 2004. But, as with the style, the message was also familiar; both uninspired and uninspiring because we have heard it all before.

But that didn’t matter either.

Kim Bradford, a 22-year old graduate student from Ohio, left the building saying, “ I just spent the best night of my life.”

When questioned about her thoughts regarding other voters her age that were so significant in the last election, Bradford replied, “When the time comes, I think people my age will be there again. President Obama makes me want to be the best I can be, and I think my friends feel the same way.”

Charlotte Hutson, a native of Charlotte and a life-long Democrat, was thrilled to hear such a “dynamic and charismatic speaker.”

However it played on television, it was certainly bigger than life in person, partly because of the loyal audience of delegates who hung on every word and partly due to the party atmosphere filled with music and Hollywood stars.

The introductory video leading up to Barack Obama’s speech was even voiced by his close friend George Clooney.

Due to the last minute change of venue, there was plenty of confetti but no traditional balloon drop. The pyrotechnics following the speeches were electronically generated but, again, none of that mattered. Delegates left the arena satisfied that they had accomplished what they came to Charlotte to achieve, and they departed the city filled with optimism for 2012.

While Biden’s tone was alternately low-key and spirited and Obama was confident and steady, one important element absent from both orations was something the ticket has chided Mitt Romney and Paul Ryan about since they left Tampa; specifics.

There were plenty of platitudes. “Hope” is now “Hopeful.” There was a lot talk about “dignity”, “pride” and “vision.”

Delegates left the building carrying signs that read, “Thank you” and “Fired Up.”

But the details of precisely how the incumbent team would finish off their “incomplete” administration during the next four years were missing.

The pep rallies are over now. There are roughly 60 days remaining for each side to make their case to the American people. Figuring out how to sway the undecided voters will be the biggest challenge for them both.

Rarely does a presidential election have such clear-cut divisions on which direction to take the country. The 2012 election will go beyond politics. Regardless of how close it may be, the result will be a mandate by the American electorate about which way the nation should face the future.

There may be a little more fire in the belly of Democrats for the moment, but that is because their convention was the most recent.

Charlotte handled itself well. The city responded to the challenge of handling a major event. And Barack Obama and Joe Biden sent their supporters into the night feeling good about their chances.

In two short months, we will all know whether they succeeded.