Fragile Lebanon does not want to share Syria’s fate 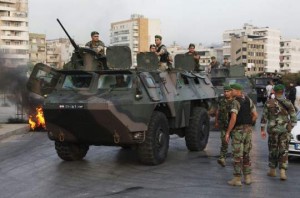 Over the past few weeks, there has been much talk about Syria’s problems spilling over into Lebanon, flaring sectarian tensions and returning the fragile country into civil war and chaos. But the reality is that the Lebanese should be congratulated for having mainly avoided falling into this trap over the past year and a half.

There is little doubt that the Syrian government has, through various means, attempted to inflame the Lebanese theatre as a means of distracting attention from its own tribulations, and reminding all of its old game as the indispensable troublemaker and problem-solver: “If you want a stable Lebanon, you need the Assad regime.”

But – despite attempted bombings, assassinations and kidnappings – Lebanese groups have, with the exception of Tripoli, withheld from sinking into the sad fate that befalls Syria today.

There are many reasons why the Lebanese have so far demonstrated this rare form of political wisdom – and why Tripoli is an exception. First, the Lebanese have already had a long and useless civil war in living memory. The trauma of this national debacle, where everyone fought everyone in a rolling matrix of revenge and arms-fuelled madness, remains strong and places a brake on the tribal reflexes that could react disproportionately to events.

Second, the leaders of all the major groups – above all, Hezbollah and the variety of Sunni groups, but also the Druze and Christians – do not see any benefit from becoming a sideshow of Syria.

This is particularly true of Hezbollah, which is a Syrian ally, but which also reads the writing on the wall regarding the legitimacy, waning strength and durability of the Assad government. It is unlikely that this Shia organisation will fall on its sword for the sake of Syria: if it fights other Lebanese, or takes over sections of the country that are not Shia, then its legitimacy as a resistance movement and a bona fide Lebanese political party will disappear into thin air.

Tripoli is an exception to this rule because the Lebanese disease of neglect of more distant regions has left the city captive to the wiles of radical Sunni groups and jihadists. These actors have more links to brethren in Hama and Homs than to Beirut. Furthermore, Tripoli also hosts a Lebanese Alawite community. This combined with the Sunni fervour there ensures a bloody Syrianisation process. Therefore, unlike the rest of Lebanon, Tripoli is not likely to recover any coherence as long as Syria boils and bubbles.

Of course, matters remain very delicate in Lebanon, but this is not new. The country is eternally fragile, and therefore an easy subject for facile political reporting across the globe.

There is a risk of matters getting worse. The Syrian government could unleash a policy of “Après moi le déluge” if it falters severely. Imagine if troublemakers placed bombs in Shia areas of Beirut, killing many, and blaming it on Sunni radicals, possibly causing a paroxysm of violence in the capital. But how long would this worst case scenario last? Do any Lebanese parties have the stamina to fight it out for long and exactly who would fight whom?

For once, instead of decrying the Lebanese, and ringing the alarm bells, we should congratulate them for demonstrating an unusual degree of statesmanship and common sense in avoiding the pitfalls that devastated the country in the past. Indeed, Lebanon’s more urgent troubles today may be more related to its disastrous electrical system and infrastructure, non-existent daily governance and polluted air, water and land than to its age-old habit of sectarian strife.

The international media would do well to concentrate more on these critical matters that may lead to social and economic collapse rather than the drama and excitement of the explosive politics of the Middle East.