Assad appears to be carving out a Alawite region

The regime of Bashar Assad appears to be using mass killings and intimidation to carve out a defensible mountainous region on the Mediterranean coast where it can survive and retain influence even if rebels take over the rest of Syria.

Such a result would be “one of the worst outcomes, a formula for a continuing civil war,” says James Dobbins, a Rand analyst who served in the State Department under Bill Clinton and George Bush.

A civil war in Syria could spark a conflict in neighboring Lebanon or Iraq and allow Iran to continue arms shipments to its terrorist allies in Lebanon and Gaza and leave much of Syria in the hands of competing Sunni militias, including al-Qaeda allies, Dobbins says.

Military experts say there appears to be a pattern to the bombardments and mass killings that Syria’s military and pro-government militias have carried out in northwest Syria. 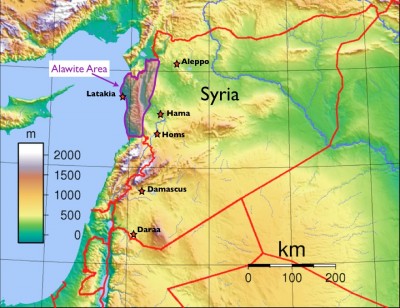 Attacks in the foothills of the Alawi mountains have eliminated tens of thousands of Sunni Muslim opponents to Assad from an area that is a traditional homeland to his backers, the Alawite Muslims. The mountains to the east and the sea to the west make the area tough to penetrate, says Tony Badran, an analyst with the Foundation for the Defense of Democracies.

Badran says Assad is preparing to “enforce a prolonged stalemate by fortifying himself inside this enclave where he can’t control the (Syrian) interior and the rebels can’t penetrate.”

“It seems to be the regime wants to continue its sectarian agenda and create some kind of ethnic enclave for the Alawites to live on the coast,” he said.

Any talk of Assad’s backup plan is “speculation at this point,” says Edgar Vasquez of the State Department’s Bureau of Near Eastern Affairs.

There have been reports for months of pro-government forces stockpiling weapons and fortifying defensive positions around Latakiah, on the Mediterranean coast, and in the Alawi mountains, says Ken Pollack, a former CIA analyst at the Brookings Institution’s Saban Center for Middle East Policy.

Early in the uprising, when democracy activists demonstrated around Latakiah, regime forces quickly shut them down “because they want to make sure they’re secure in that part of the country,” Pollack says.

The number of people forced from their homes has increased dramatically in recent weeks. About 235,000 Syrians have fled the country since the uprising began in March 2011, 100,000 of whom left in August alone, according to the United Nations.

Alawites have been flooding back to the Alawite region from the Syrian interior, says Lama Fakih, a researcher for Human Rights Watch, based in Beirut.

Though an outcome that leaves Assad’s regime intact would undermine the Obama administration’s stated goal of cutting Iran’s ties to the region, Pollack says the danger goes beyond Iranian influence.

The question is not “whether the Iranians have a tiny ally in the mountains, but whether this has a destabilizing affect on the region, which we’re starting to see already in every neighboring country except Israel,” he says.