Our Lady of the Castle monastery target of Syria attacks 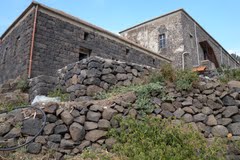 Shells fired    Sunday morning from Syria appear to have targeted  Our Lady of the Castle Maronite monastery in the town of Menjez in  the Akkar district  near the Lebanese Syrian border , National News Agency reported.

“A large number of shells coming from the Syrian side landed on Lebanese  border villages and towns adjacent to the Al-Kabir River.  The    town  of Menjez  where  the Christian Maronite monastery Our Lady of the Castle is located witnessed the most intense shelling  resulting in the displacement  of  many  residents who headed for  safer areas,” NNA reported.

“The residents reiterated their call on officials to protect them against the Syrian  shelling  and  put an end to the  violations of Lebanese sovereignty.” NNA reported .

Syrian troops have been violating  Lebanese territory  on regular basis .  Last  Saturday they entered Lebanon and  kidnapped two Lebanese nationals in the Al-Dawra area in the Hermel town of Masharee al-Qaa.

The current Lebanese government is dominated by Hezbollah and was reportedly made in Syria.

Hezbollah has been supporting the crackdown by the  Syrian regime of president Bashar al Assad ever since the 18 month uprising by the Syrian people began . Over 25,000 people have been killed so far, mostly civilians.