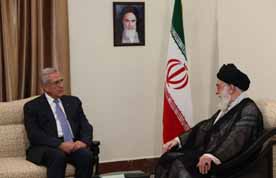 The president had met earlier with his Egyptian, Iranian and Palestinian counterparts, Mohammad Morsi, Mahmoud Ahmadinejad and Mahmud Abbas, the report said.

Iran’s controversial nuclear activities and the bloody conflict shaking Syria dominated the agenda of the summit in Tehran on Thursday.

Those issues swept aside the diplomatic harmony Iran had been trying to project during the gathering of 120 members of the Non-Aligned Movement.