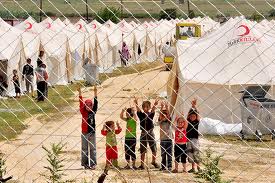 Hollande called on those opposed to Syrian President Bashar Assad to declare a “provisional government.”

Many experts view even a provisional government in exile as a distant goal since the Syrian opposition remains deeply divided along political, ethnic and sectarian lines and lacks a unified leadership.

Thousands of Syrian refugees were reportedly stuck on the Syrian side of the border as overwhelmed Turkish authorities hastened to build more camps to house them and also imposed heightened security checks on new arrivals, the Turkish media reported.

Turkey has already taken in about 80,000 Syrian refugees, and several new camps will increase the capacity to about 100,000 — the number that Turkish officials have suggested could be their nation’s limit. Refugee flows have swollen in recent weeks as violence has flared across Syria.

“The rising number of refugees brings a certain load,” Turkish Foreign Minister Ahmet Davutoglu told reporters in Ankara, Turkey’s capital. “This burden has to be shared with the international community.”

Turkey has suggested that the United Nations consider setting up refugee camps in Syria. A plan for such a haven, however, would probably require an armed force to protect the designated zone. The United States and other Western nations have been hesitant to become embroiled in Syria’s raging conflict.

The issue is likely to be discussed at the U.N. Security Council on Thursday during a session dedicated to the humanitarian crisis in Syria.

More than 200,000 refugees fleeing the fighting have escaped into neighboring nations, including Turkey, Jordan, Lebanon and Iraq. The outflow is one illustration of how the conflict threatens to destabilize the region. Syria-related violence has also spilled into Lebanon.

Fierce fighting continued in Syria on several fronts Monday, notably in and around its two major cities, Damascus, the capital, and Aleppo.

The Syrian opposition says video posted on the Internet proves that rebel forces shot down a military helicopter in Damascus that had been firing on insurgent positions. The video shows what appears to be a helicopter, engulfed in flames and smoke, plunging to the ground.

Syrian state television confirmed that a helicopter had crashed in Damascus but provided no details, news agencies reported.

The contents of the video could not be independently corroborated.

If rebels did shoot down the helicopter, analysts will be keen to determine whether fighters used machine guns or more sophisticated weaponry, such as shoulder-fired antiaircraft missiles.

Syrian insurgents, outfitted mostly with rifles, rocket-propelled grenades and homemade bombs and mortar launchers, have had little recourse in recent weeks as government aircraft have pounded their positions in various embattled regions of the country.

The opposition complains about a lack of antiaircraft weaponry, despite reports that some missile caches have reached rebel forces, either seized from government armories or provided by foreign suppliers.

There has been no public indication that Syrian insurgents have acquired significant stocks of shoulder-fired antiaircraft missiles, though it may just be a matter of time until such systems become part of the rebel arsenal. U.S. and other officials worry about shoulder-fired missiles falling into the hands of Al Qaeda-linked groups and other Islamic militants.

Still, antiaircraft capability could possibly help alter the calculus of battle in Syria, where the uprising against Assad is entering its 18th month. The government’s superior firepower has thwarted rebel efforts to consolidate territorial gains.

The reported shoot-down of the military helicopter took place a day after opposition activists accused the government of massacring hundreds of residents of a Damascus suburb, Dariya, during a siege that ended last weekend. The government blamed “terrorists,” its standard term for the rebels, for the deaths.

The apparent mass killing has sparked a new round of condemnation of the Syrian government from the United States and other nations calling on Assad to step down. Assad blames the violence on terrorists funded from abroad and has vowed to crush the armed opposition.