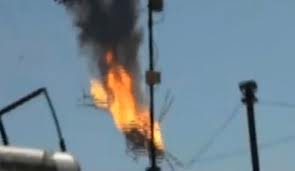 Rebels shot down a Syrian army helicopter on Monday while it was bombarding the Damascus neighborhood of Jobar, as heavy fighting broke out between rebels and troops loyal to Syrian President Bashar Assad in the district, witnesses said.

Syrian state television said in a news flash a helicopter had been downed in Damascus, but offered no further details.

The witnesses said the helicopter was engulfed in flames after it was hit by a projectile during a burst of gun fire and then came down in the nearby district of Qaboun.

Video footage taken by activists also showed a burning helicopter falling to the ground. Rebels on the ground could be heard shouting “God is greatest”.

About 320 bodies, including women and children, were found in houses and basements in the town of Daraya, southwest of Damascus, according to activists who said on Sunday most had been killed “execution-style” by troops.

Activists uploaded several videos to the Internet showing rows of bloodied bodies wrapped in sheets. Most of the dead appeared to be young men of fighting age, but at least one video showed several children who appeared to have been shot in the head. The body of one toddler was soaked in blood.

The killings in Daraya, a working class Sunni Muslim town that sustained three days of bombardment before being overrun by the army on Friday, raised the daily death toll to 440 people on Saturday, one of the highest since the uprising began, an activist network called the Local Coordination Committees said.

The official state news agency said: “Our heroic armed forces cleansed Daraya from remnants of armed terrorist groups who committed crimes against the sons of the town.”

The death toll for the following day, Sunday, was more than 90, including civilians and fighters, according to another activist network, the Syrian Observatory for Human Rights.

Assad, who met an Iranian parliamentary delegation in the capital on Sunday, said the crisis was the result of Western and regional states trying to crush Syria’s role in the “resistance” against Western and Israeli domination in the region.

“What is happening right now is not just a plot directed against Syria but the region as a whole, of which Syria is a foundational stone,” he was cited as saying by state news agency SANA.