Assad: Syria will defeat ‘foreign conspiracy’ at any price

President Bashar al-Assad said on Sunday that Syria would defeat what he described as a foreign plot being waged against the country, according to the official SANA news agency.

“The Syrian people will not allow this conspiracy to achieve its objectives,” Assad said. “What is happening now is not only directed at Syria but the whole region. Because Syria is the cornerstone, foreign powers are targeting it so their conspiracy succeeds across the entire region.”

“The Syrian people will prevent this conspiracy from achieving its goals at any price,” he said.

Assad’s statement came during his meeting with an Iranian delegation led by MP Alaeddin Boroujerdi, head of the Iranian Parliament’s National Security and Foreign Policy Commission. Boroujerdi also met with the Syrian vice president Farouk al-Sharaa, ending widespread rumors that he has defected few weeks ago.

On the ground, at least 151 people have been killed across Syria Sunday by forces loyal to president al-Assad, the Local Coordination Committees (LCC) said. The activist group said more than half of the killings took place in Damascus and its suburbs.

The Syrian army was accused of committing a massacre in the town of Darya outside the capital when 300 bodies were found on Saturday, a day after the town was retaken by government forces. 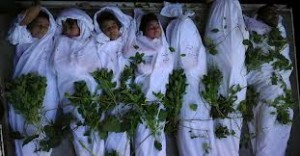 Graphic images emerged on Sunday of dozens of bodies sprawled in the streets and lined up at a graveyard. In the most grisly video, posted by opposition media outlet Sham, rows of bodies were seen at a graveyard in the town of Darya southwest of Damascus, many of them bloodied and disfigured, with large patches of skin charred black.

This raises the death toll to more 450 people killed in the last 48 hours, including dozens of women children, according to LCC, making it one of the highest death tolls since the uprising against the rule of al-Assad broke out in March 2011.