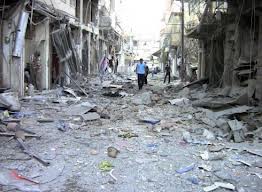 Gunfire and shelling rocked Damascus, Syria, and its suburbs on Wednesday as opponents of President Bashar al-Assad reported a widening campaign by the military to sow fear and death in neighborhoods where the rebels are strong and the government is too weak to assert full control.

The Syrian Observatory for Human Rights, an opposition group in Britain that maintains a network of contacts in Syria, said the latest government raid on Wednesday morning in Kafar Soussa — with tanks backed by infantry soldiers — left at least 24 people dead. In the Damascus neighborhood of Qaboun, activists said, Syrian forces executed dozens of others.

Opposition groups described both as “hit-and-run” assaults. Similar attacks have been reported in several areas ringing the capital in recent weeks, as troops and shelling intensify then fade and as the government kills and leaves.

This week, activists reported finding 40 bodies in one suburb; last week, 60 others were discovered in a landfill, many of them believed to be civilians.

Analysts said the effort — in which the government invades but does not hold an area — underscores the challenge that Mr. Assad faces as he tries to defeat an insurgency that often slips away, only to resurface. It is an effort that experts describe as the opposite of the “winning hearts and minds” model and is based instead on the Arabic saying “rule is based on awe.”

“Terror is the basic approach,” said Paul Salem, director of the Carnegie Center for the Middle East. “From the beginning of the uprising the logic was hit and hit hard, punish and scare, and that would be the way to do it.”

But he added, “It’s a crazy logic, and it has not served them well.” While the approach worked when the Syrian government suppressed a revolt in Hama in the 1980s, he said, the current effort to intimidate the country into calm is increasingly showing signs of failure.

The opposition throughout Syria has not broken; it has scattered and regrouped. In many areas, from north to south, the government has claimed that its mission has been accomplished, or would be quickly, only to have the rebels resurface to fight again with help from local residents.

In Aleppo, Syria’s largest city, the government has tried nearly everything, including missile strikes from fighter jets, but while rebel brigades have retreated temporarily from some areas, they have created what amounts to formal rotation schedules in others.

They have also completed their own successful hit-and-run ambushes on the military airport that is the main base for government troops, and on the city center, while food and other supplies have been provided by wealthy residents.

In the region around the southern city of Dara’a, where the uprising began, the pattern has been similar. On Tuesday, rebel leaders said they were retreating from several areas because of an ammunition shortage, but on Wednesday, they reported reoccupying some of the places they had fled.

There are also many areas, more distant from the most concentrated fighting, where the government’s forces have retreated as rebels have made incremental gains.

Deir al-Zour is one example. An area deep into the east of the country, about 300 miles from Damascus, it has seen intense fighting at various times during the nearly 18-month-old conflict, but in recent weeks, the battle has taken on what rebels there described as a familiar pattern: government troops based outside the city, and with little knowledge of the area, use air power and shelling, but not much else.

“The Assad forces are afraid to enter the towns and villages, so they started with this new strategy of bombardment from long distance and from helicopters,” said Abu Khalaf, 40, a fighter sitting at a rebel base in Deir al-Zour. “We can succeed because we know the land, while the Assad forces are coming from outside the province.”

On Wednesday, an activist in another section of Deir al-Zour said rebels had seized two checkpoints near the Iraqi border, taking over government buildings as officials fled.

The dynamic, Abu Khalaf said, has changed: the government has become the equivalent of a foreign power. “We are fighting to liberate our country from the Assad occupation army,” he said. “We don’t have a government that runs the country; we have an occupation army.”

Deir al-Zour is also where rebels said last week that they had shot down their first fighter jet, using an antiaircraft weapon seized from the military.

The fighter who claimed to be responsible, Abu Allawi, has become a hero among the rebels, and he says he has also become a target for the government. His commanders denied requests to make him available for an interview.

Another fighter who said he was with Abu Allawi when the jet crashed said that most of the fighters in the area were defectors and that they had been using purloined military weapons — including antiaircraft weapons — to gain an advantage. He described the attack on the fighter jet as a mix of luck and talent.

“We deploy these antiaircraft guns around the villages and among trees and houses, so the regime didn’t expect us to use them like we did,” said the fighter, who identified himself with the nickname Abu Mohammed. “The surprise played a key role in downing this MiG fighter, which was flying in low; the pilot was feeling relaxed as he bombed, and when he flew in really low, Abu Allawi shot it and was able to target the body of the plane. That set it on fire.”

The Syrian government has contended that the aircraft crashed because of a mechanical problem.

The rebels’ account, which is consistent with earlier unverified reports of the downing of the plane, suggests that any strike against Syrian aircraft would not be easy to repeat.

Abu Mohammed, 35, said the initial claims that the rebels were on their way to creating their own no-fly zone, without international support, seemed far-fetched, at least until the rebels could seize or buy stronger weapons.

He said the fighters were trying to acquire Stinger missiles “from some ‘friends’ in Iraq.”

“We hope to get them because that will change everything in our region,” he said.