Top Syrian minister hints that Assad could step down 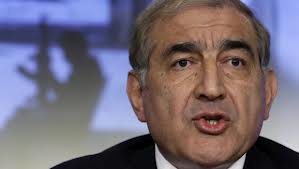 A TOP Syrian minister has held out the prospect of strongman Bashar al-Assad stepping down as part of a peace deal.

International powers including the US have long said Assad should step down as part of any negotiated settlement to end 17 months of bloodshed that activists say has killed 23,000.

The comments from Syria’s Deputy Prime Minister Qadri Jamil came following talks with Foreign Minister Sergei Lavrov and other Moscow officials who are keen to keep their sway over the Soviet-era ally in case of the fall of Assad.

Mr Jamil rejected the idea of making Assad’s resignation the condition for any future negotiations – a demand made not only by the armed opposition but also Washington and several big European states.

But he said the president’s departure could be a topic of discussion.

“As far as his resignation goes – making the resignation itself a condition for holding dialogue means that you will never be able to reach this dialogue,” said Mr Jamil.

But the minister added in remarks translated into Russian: “Any problems can be discussed during negotiations. We are even ready to discuss this issue.”

The United States announced on Monday that it would be promoting Assad’s resignation during meetings with new UN peace envoy Lakhdar Brahimi despite his initial refusal to back the idea.

Kofi Annan’s recent replacement had earlier this week said it was still too early for him to say whether pushing for Assad’s ouster was the right strategy at this point in the conflict.

US pressure on Syria escalated still further on Monday when US President Barack Obama implicitly threatened to launch an attack should the Damascus regime deploy a chemical weapons stockpile it acknowledged having only last month.

The US leader said pointedly that he had not ordered military engagement against the Syrian regime “at this point”.

But Assad’s use of chemical weapons “would change my calculations significantly”, said Mr Obama.

Mr Jamil waved off the threat as part of US election politics rather than an actual declaration of intent.

Mr Jamil was paying his second visit to Moscow in two weeks in a bid to put the fishing touches on a framework agreement for fuel supplies and other urgent Russian assistance and loans.

The country’s top aid negotiator admitted that he had failed to secure a financial rescue promise on this occasion because the Russians preferred to talks about the fighting now raging on the ground.

“The issue of a Russian credit was discussed during my previous visit,” Mr Jamil confirmed in reference to his early August appearance in Moscow.

“This time, we focused more on political issues.”

The comment appears to betray a growing impatience by Russia to achieve some sort of progress toward peace talks it has been backing in the face of escalating violence and little sign of concession from Assad.

Russia has adamantly defended Syria against the threat of foreign military invasion and still continues to formally supply Assad with heavy weapons under contracts it signed before the fighting broke out.

But its efforts to get new international talks going on Syria at the United Nations ended in fiasco earlier this month when most world powers pulled out.

Many of them called Russia’s efforts futile because of the sides’ vast diplomatic differences and the rapidly growing death toll on the ground.

But Russian Foreign Minister Sergei Lavrov said Moscow could adopt no other position.

“There should be no interference from the outside,” Mr Lavrov said after his talks with the Syrian minister.

“The only thing that foreign players should do is create conditions for the start of dialogue,” Mr Lavrov said.