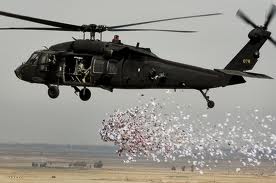 Syrian helicopters have dropped leaflets over the northern city of Aleppo urging residents not to shelter rebels and warning the Free Syrian Army it had one last chance to surrender.

Some of the leaflets dropped late Saturday, in what rebels and residents said was a first, were designed as official-looking checkpoint passes for supporters of the rebels wishing to surrender.

Other more basic leaflets printed on pink or white paper urged the rebels to put down their weapons.

“Your last chance to stay alive is to give up your weapons because there is nothing you can do against the Syrian army. Don’t miss that opportunity, go back to your family and stop fueling hatred around you,” one said.

“Honourable citizens, don’t turn your homes into places for armed terrorist gangs and don’t assist them in killing the people of your country,” read another leaflet collected by an AFP reporter near Bab al-Hadid in central Aleppo.

The leaflets were met by the disbelief and laughter of the rebels who picked them off the streets.

“I can’t believe how disconnected from reality they are. Bashar al-Assad, what a stupid man. He probably thinks all the people in Syria are as stupid as he is,” said Abdallah, a Free Syrian Army fighter.

Two hours after the leaflets were dropped, helicopters were back in the sky and opened fire on several central neighbourhoods.

Rebels control the ground in large parts of Aleppo but continue to be harassed by tank shelling, air raids and sniper fire.

Civilians and rebels alike fear a major offensive by the Syrian army in a bid to reconquer the country’s commercial capital.