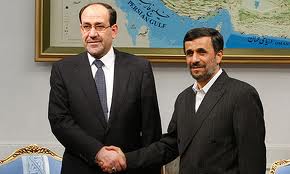 Iraq has been helping Iran skirt economic sanctions imposed because of its nuclear program, using a network of financial institutions and oil-smuggling operations that are providing Tehran with a crucial flow of dollars, the New York Times said on Saturday.

In some case, Iraqi government officials are turning a blind eye to trade with Iran, while other officials in Baghdad are directly profiting from the activities — with several of them having close ties to Iraqi Prime Minister Nuri Kamal al-Maliki, the Times said.

U.S. President Barack Obama acknowledged the problem last month when he barred a small Iraqi bank, the Elaf Islamic Bank, from any dealings with the American banking system, the newspaper said.

At the time, the president said that the bank had “facilitated transactions worth millions of dollars on behalf of Iranian banks that are subject to sanctions for their links to Iran’s illicit proliferation activities.”

And yet Iraqi banking experts told the Times that Elaf Islamic Bank was still participating in the Iraq Central Bank’s daily auction at which commercial banks can sell Iraqi dinars and buy dollars. Through these auctions, Iran is able to bolster its reserve of dollars that are used to pay for much-needed imports.

The Times, citing sources in the Obama administration, current and former American and Iraqi officials and banking and oil experts, said Washington has privately complained to Iraqi officials about financial and logistical ties between Baghdad and Tehran.

In one recent instance, when Obama learned that the Iraqi government was aiding the Iranians by allowing them to use Iraqi airspace to ferry supplies to Syria, he called Maliki to complain, and Iranian planes then flew another route, the Times said.

Iranian organizations apparently have gained control over at least four Iraqi commercial banks through Iraqi intermediaries, which would gives Iran direct access to the international financial system, from which they are barred by the economic sanctions, the Times said.

The problem with illegal Iraq-Iran trade has become well-enough known in Baghdad that it has roiled Iraqi politics, the newspaper said.

“We want to question the central bank and the banks that are involved,” Ali al-Sachri, a member of Parliament, told the Times. He said he was concerned that the huge dollar transfers threatened the economic stability of Iraq by depleting the country’s foreign reserves.

Iran’s ability to trade and the incoming flow of dollars is crucial to the country because the economic sanctions imposed by the United Nations and individual countries are squeezing its economy, the paper said.